In the pages of a magazine

For three years (1997-1999) Fleer/Skybox produced ranges of baseball cards that tied in with Sports Illustrated, the famous sports magazine that ran into financial difficulties last year.

I've got a couple of cards featuring Tony from two of the issues and also something else that slightly stretches the definition of baseball cards.

The Sports Illustrated ranges cross over the transition from Fleer's ownership by the bankrupt Marvel Entertainment Group into the card company run by the Grass family. The contract with Sports Illustrated to produce the cards must have been part of the Fleer/Skybox package that Marvel auctioned. 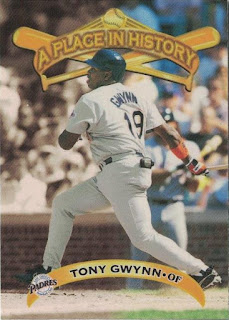 This is from the 'A Place in History' section of the Then and Now series, a 150-card set that was a mix of Hall of Fame legends and future likely candidates from among active players. (Although that group of players includes Mark McGwire and Barry Bonds, neither of whom have made it through the ballot. This was a couple of years before the steroid scandal broke.)

The back contains a summary of why Tony had earned a place in history. 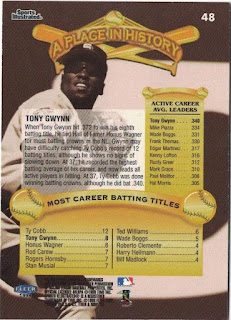 I haven't got Tony's base card from the main Sports Illustrated range in 1998, but instead I have something else.

"Card" Number 183: Sports Illustrated Mini-Poster, 1998; #25
These were inserted into card packs and look like this when you see them in a penny sleeve. 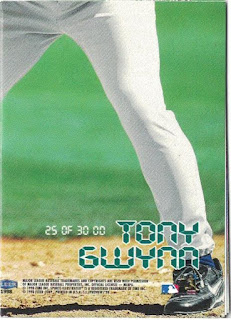 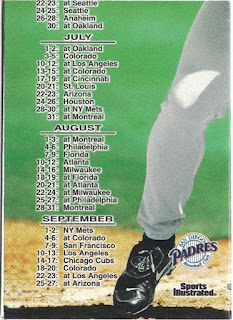 The poster folds out into this. 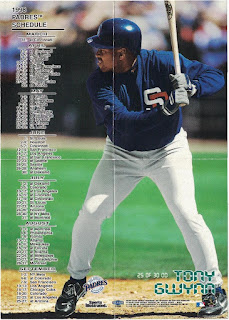 That's the complete season schedule down the side there for 1998. I say complete. Obviously they couldn't predict the Padres winning the National League pennant and ending up in the World Series.

I wasn't sure whether to include this as a card. But then if I'm including things like this... 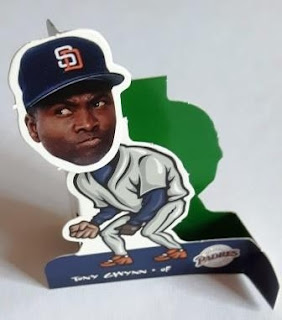 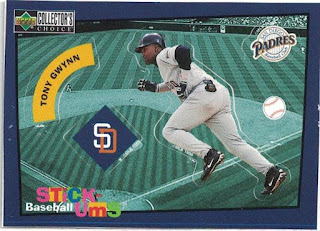 ...then I think this poster counts. The poster came in a cardpack, and is listed on Trading Card Database, so it's eligible for inclusion. And besides, it's my collection.

It is a bit weird, though, because the way it folds it feels natural to have Tony's name on show, but then you end up with a 'card' pocket that looks like just a picture of his leg and, um, his nether regions.

After that, it's a bit of a relief to finish with a regular, ordinary base card. 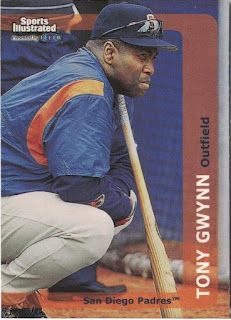 It's an unusual card photo, which looks like it was taken during a training session. 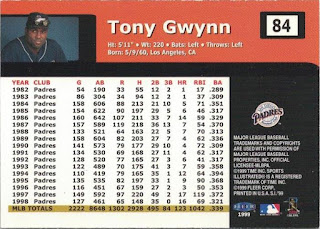 The back is just one big stats box.

This wasn't the only base card Tony was on in the 1999 Sports Illustrated set. He also crashed team-mate Greg Vaughn's card. 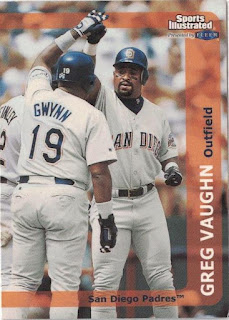 (I only have Greg's card because I bought a small lot of Tony Gwynn cards and it was included in the bundle.)

Sports Illustrated went bankrupt last year although it is still being published. Print media has really struggled as the world has gone online at an increasing pace. Maybe it's time for them to consider linking up again with a baseball card company to try and keep their brand in the public eye.