As I've mentioned in my hello panel on the right hand side of my blog, I live in Wales. Baseball cards are a niche interest in the UK that is growing with a lot of new people starting out in the hobby. So sometimes I include some information about the cards that I show, or about baseball, that is well-known to long-time collectors.

Today's blog post is about the Upper Deck Card Company. A lot of card collectors and bloggers will know a lot of this, so please be patient, or scroll down and just see the cards. (I don't mind, honest!)

Towards the end of the 80s, the baseball card market was getting a bit crowded. Topps, Fleer and DonRuss were all producing larger and larger sets of cards, and the hobby was entering what became known as the "junk wax" era. The nickname is from the way cards were wrapped in wax packets, and because so many were produced. Unopened packs from that time are still widely available.

In 1988 a new company entered the fray, Upper Deck. Their cards were different - a premium product - which sold out in their debut 1989 season. The popularity of Upper Deck cards was such that they won "Card Set of the Year" every year from 1989 through to 2004. Upper Deck cards are noticeably different to their contemporary competitors. They are of better stock, glossy, have colour photos on the front and the back, and boasted much better photos. I've already written about how Topps chose some odd images of Tony Gwynn, but he was much better served than some other players. Upper Deck didn't do weird behind the plate photos of a players shoulder.

Upper Deck were true innovators as well. They were the first card company to insert autographed cards into packs. They created the concept of relic cards. They also led the field in other innovations like foil on cards and insert series in their collections.

In 2007 Upper Deck almost bought the Topps company, which was struggling at the time. However, they failed in their takeover bid. The new owners of Topps paid for an exclusive licence with Major League Baseball and Upper Deck were sued for copyright infringement for including team logos and team names. Rather than produce cards without logos, Upper Deck quit the baseball card market.

So, this blog post is a tribute to the wonderful disrupters, Upper Deck.

Unfortunately I don't have Tony's card from 1989, so I'm going to have to start with... 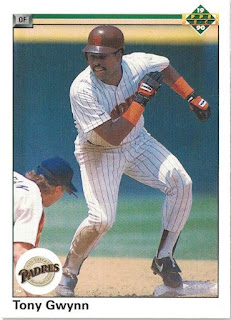 I really like this card. Tony is trying to avoid getting tagged out at a base there. I think he looks like he is dancing. I'd love to be able to identify the baseman. I think that orange stripe on his arm is an Astros uniform, and his name seems to end RAN. The Astros second baseman in 1989 (when this photo was most likely taken) was Bill Doran, so maybe he is Tony's dance partner here. 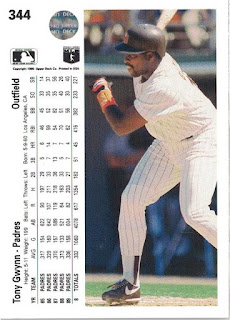 On the back we have Tony following through on a swing. The only criticism I'd make of this card is that the stats look awkward perpendicular to the photo. 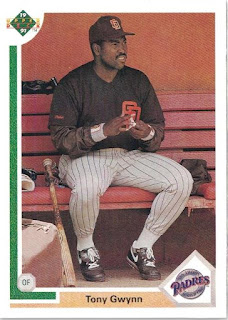 Tony on the bench, watching the game. I'm trying to work out what he is doing with his fingers. I think he is applying tape to them to improve his grip on the bat handle. 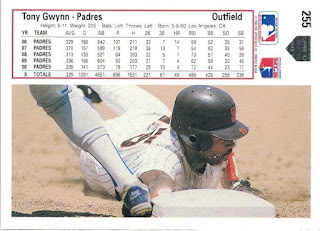 I'm just going to call this now, I don't think there will be a better photo on a card back in any post on this blog. Here Tony is sliding headfirst to try and touch the base. I presume he made it. I don't think there's any way to identify the baseman's leg in this photo, although he is wearing Nikes! The stats and the photo align much more satisfactorily with each other, if not with the card number and licensing logos. 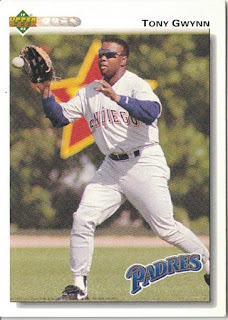 This must be a photo from a training session. Tony was one of the first players to popularise wearing sunglasses in the outfield. 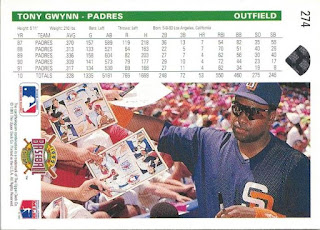 On the back he's signing autographs, most likely at the 1991 All Star Game. It looks like fans are handing him special sheets for him to sign. He's holding a Sharpie marker but someone is handing him a sheet of paper and a really chunky marker as well.

In the book He Left His Heart in San Diego, one of Tony's longstanding friends said that Tony was always very careful to sign things properly because he felt it was important for the fans to have his undivided attention. Judging by this crowd he was going to be signing for a while! 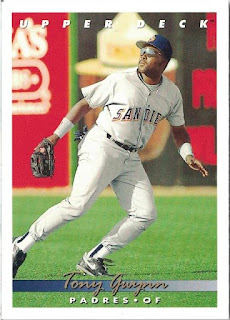 After sticking with roughly the same format for a few years, this Upper Deck design was a bit of a gear-shift in direction for them. This is another outfield photo, this time of a genuine outfield. That looks like Smokey the Bear on the advert behind him. (Tony actually appeared on a card with Smokey once, as chronicled by Fuji, one of my favourite card bloggers.) 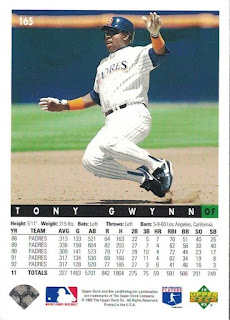 The back features Tony starting a slide towards a base or home. The photographer has managed to catch him with both feet off the ground, though.

One thing I noticed looking at all 4 cards is that only once in 8 photos is Tony shown at the plate, and even then he is not in his batting stance, having followed through on a swing. 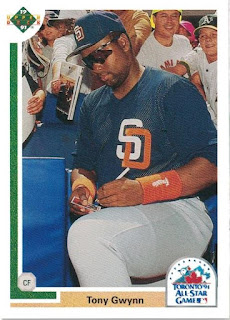 Towards the end of the 1991 season, Upper Deck brought out a smaller range of cards called Final Edition. There were 100 cards in the range, including several rookies who had debuted during the season, a few big names and twenty All Stars. Tony was among the 20 All Stars and had the logo from the All Star Game in Toronto on his card.

It's another card picture where he is signing autographs. He is wearing exactly the same outfit as in the picture on the back of the 1992 base card, including the sunglasses and wristguards, so I think this photo was taken at the same time. I particularly like the really excited kid in the Athletics cap who looks like he is reaching out to touch Tony. You don't get many cards with fans' faces on. They're always fun. 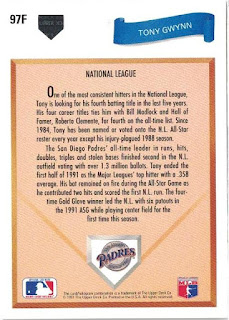 Tony was in the starting line up in Toronto. As the back of the card says he got two hits and scored one of the National League Team's two runs. For a plain cardback, this is a simple and effective design. Yet another thing that Upper Deck did well.

I mentioned the Chronicles of Fuji in this post. It's a great blog. I really want to thank Fuji for his encouragement and for giving this project a shout out on his blog a few days back.
Posted by Jongudmund at 8:09 AM

Email ThisBlogThis!Share to TwitterShare to FacebookShare to Pinterest
Labels: 1990, 1991, 1992, 1993, All Star Card, base card, Toronto All Star Game, Upper Deck