Card Number 158: Topps Stadium Club, 1995; #508
This is from a little grouping of cards featuring players that Topps dubbed the "Extreme Corps". I don't know what that is meant to mean. 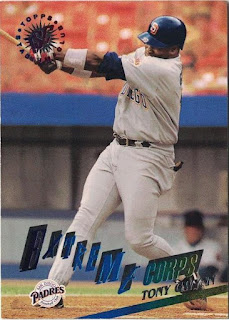 I presume it's not a reference to rock band Extreme, whose star was beginning to wane in 1995. That logo with the swirling letters does look like it belongs to them though.

The back is, well, this: 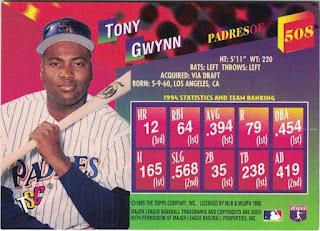 It's a nice photo of Tony, is what I'll say about it. To be fair, the stats display is a massive improvement on previous years. Everything is oriented the same way. It's not terrible the way other cardbacks from the Nineties are terrible.

Tony's 1996 Stadium Cluib card has a great photo of him sliding towards a base - read about it here. 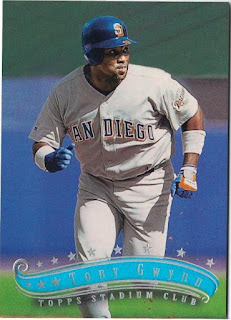 Another year, another new branding choice. This has a pennant feel to it. It's also embossed.

A much simpler cardback, which I think looks quite modern despite it being 23 years old. 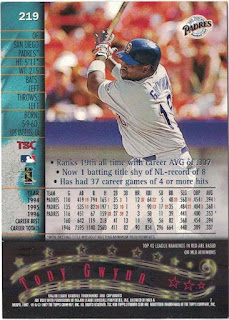 Seriously, if someone told me they had pulled that from a pack in the last 3 years I would believe them. It has proper factoid stats as well. 37 games with 4 or more hits is quite something. It also notes he was one batting title away from a record-setting eighth. He got that eighth title that season. 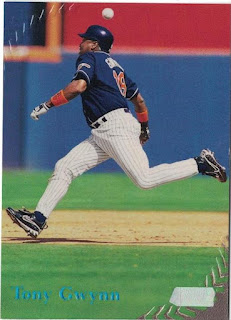 I don't know what that ball is above Tony's head. I have a feeling it might be part of the design on the advertising hoarding behind him. The embossed stitching motif invades the picture a bit, and there's another new Stadium Club logo.

The back has Tony in a fielding pose. 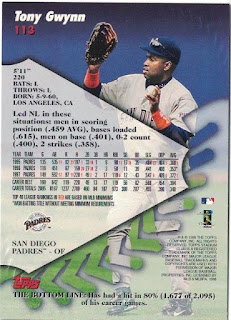 This year, Stadium Club included a 'bottom line'. That is some factoid - he had a hit in 80% of games he played in. It still means that one in five game he blanked.

I'll round up the Stadium Club cards tomorrow.