A couple of revolutionary cards from Pacific today.

Card Number 192: Pacific Revolution, 1999; #120
Revolution was a premium card range from Pacific. Knowing how Pacific liked to splash foil and fancy stuff on their base cards, you'd expect epic shininess in their premium range.

And you would be right. 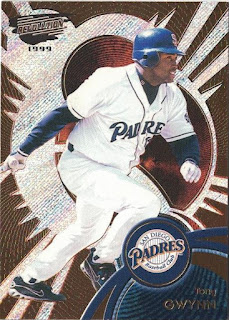 Tony looks like he is exploding superhero-style off the card. If someone ever draws a biographical graphic novel of Tony, this is a panel for it.

The card back is less remarkable. 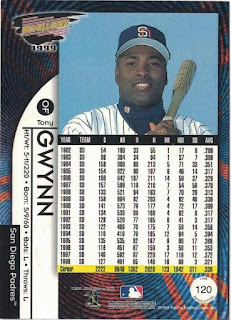 In his later career it was hard to create a card with a full stats box that looked halfway interesting, but Pacific tried at least. The photo is a posed shot - no complaints about that! Also, it's helpful that Pacific put the name of the range on the front and the back and include the year in the range logo. It makes it easy for collectors to know what they are holding.

Card Number 193: Pacific Revolution, 2000 (On Deck insert); #17
This is from a 20-card insert series called 'On Deck' in the Revolution set for 2000. It has a die-cut curve along the bottom, which makes it look like Tony is a collectible action figure. 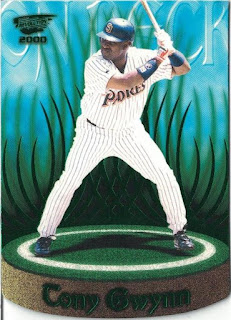 The "grass" in the background is quite strange.

Given how this card is a total photoshop effort, why didn't they 'shop out the letters behind Tony in the photo on the back? (That's one for the 'Questions to ask baseball card designers' box.) 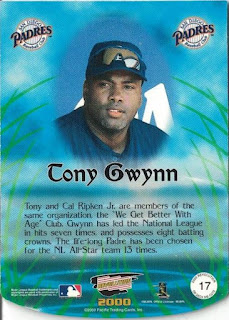 There's a little write up summarising Tony's long career in terms of awards and All Star selections. It also compares him with Cal Ripken Jr, another record-setting veteran. Tony and Cal were the two inductees to the Hall of Fame in 2007, so it's funny to see them grouped together here seven years before they were both given plaques in the Hall.