I'm running a little series of posts about Stadium Club cards. I really like this one. 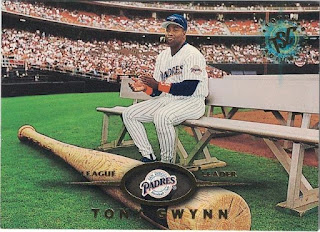 I simply adore this photo. It is so odd and staged and Tony looks a bit embarrassed about the whole thing.

It also reminds me of the denouement of the Dr Seuss book I Had Trouble in Getting to Solla Sollew, which chronicles the dangerous journey of a disaffected youth who wants to leave behind all the irksome beasties that are troubling him by escaping to the magical city of Solla Sallew, where they don't have any troublesome critters. He eventually gives up when he realises there are troubles everywhere and goes home to try a different approach to dealing with the things that trouble him. The last page always makes me laugh:

"But I've bought a big bat.
I'm all ready you see.
Now my troubles are going
To have troubles with me!"

Anyway, this card picture makes me think of that line. "I've bought a big bat!"

The cardback is a definite contender for the 'Mid-90s Design Horror Award', if such an award existed. Topps have managed to orient the wording in three different directions! On the plus side it has bar charts. 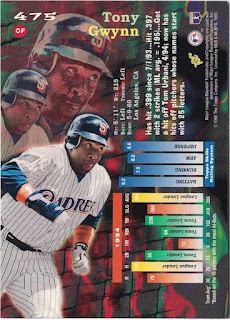 I am a bit of graph nerd and I like a good bar chart. These don't seem to be based on actual figures and are more of a graphic representation. However they show that Tony was the league leader for hits and batting average, and the Padres leader for second base hits, third base hits and RBI. The blue bar chart is just the "Topps Skills Rating System", which I suspect are totally arbitrary opinions of Topps staff rather than based on any observed measurements.

Also, of note, this is the third Topps Stadium Club logo. The second logo lasted one season.