When I looked through the cards that Richard sent me recently, two cards matched so much I instantly thought, 'That's a twins post!'
Card Number 760: Topps All-Star Collector's Edition, 1985; #29
This was the first time Tony was included in these sets of glossy cards that were mailed to collectors who sent in tokens. I have previously blogged some of his cards from these sets that were issued in later years. 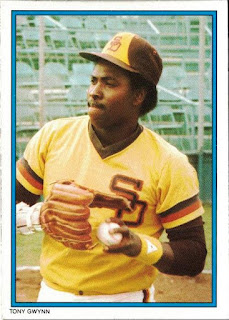 That yellow shirt was history in 1985. After reaching the World Series in 1984, the Padres revealed an all new look for the following season - white pinstripes at home and grey pinstripes for the road uniforms. The background of this photo makes me wonder if is was taken at a Spring Training game in 1984. Topps used photos taken at Spring Training on some cards.
The back of this card is very dull. The glossy photo on the front is supposed to make up for having nothing to look at on the back. 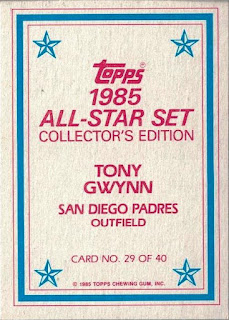 The other card this matches also has a dull cardback.
Card Number 761: Topps Allen & Ginter, 2012; #205
Topps had been releasing Allen & Ginter sets since 2006 but I think this is the first time Tony appeared in one of the sets. He is also on an insert card from this set.
And, there it is, 27 years after Topps produced that glossy All-Star card, the same picture appears with a small filter applied to make it look more like it has been drawn. 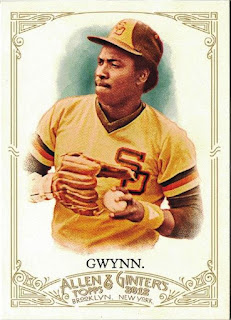 And here is the back. This must have felt fun and quirky once, but I feel the novelty has worn off. 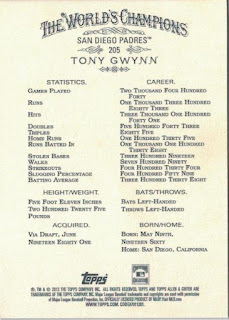 This isn't the only time Topps re-used the photo. In 2013 they mocked up what an All-Star card from 1984 could have looked like. (At least the uniform would have been right on that card!) 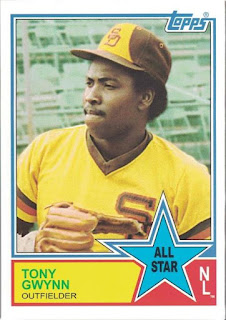 Topps go through phases of using the same photos in several sets released around about the same time, so seeing this picture in sets released in successive years isn't that surprising. It's a nice photo, so I'm not complaining. It was just a bit odd getting two cards in the same parcel that were released so far apart and yet look so similar.
Total: 761 cards
Posted by Jongudmund at 8:25 AM