Astrology and onomastics in Allen & Ginter

I've been dwelling in the 90s for my last few posts, so here are some more recent cards that have come my way.

Allen & Ginter (A&G) is a Topps brand of retro looking cards, which I quite like. They are a more expensive product and include a lot of retired stars in their sets every year, usually in their insert series based around a gimmick. 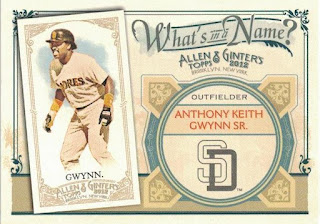 The field of studying names is called onomastics. "Anthony" derives from the Latin and could mean "Priceless". "Keith" is a Scottish name originally. There are places called Keith, one of which has a soccer team called Keith FC, and players playing for that team also called Keith. (Their current captain is Cameron Keith!) It's probably from Gaelic and could mean "wind" or "wood". "Gwynn" has a Welsh origin (Yay!) - the word 'gwyn' in Welsh means "White". (Gwin gwyn means white wine!)

A&G ignored all these possible names and focussed on his epithet, "senior". When he was playing, Tony was never known as Tony Gwynn Sr. A&G used it so they could write about his son, Anthony Keith Gwynn Jr, who has also had a respectable major league baseball career. 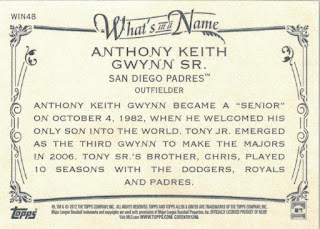 I admit I feel silly quibbling with what's written on the backs of baseball cards, but there is a lot that could be made out of a "priceless" wielder of "wood" when talking about a baseball player known for his batting! It's almost as if Topps had their stock of factoids pre-written and then had to somehow shoehorn them into the A&G theme.

Card Number 36: Topps Allen & Ginter 2019, #BSS42
In 2018, the gimmick was starsigns for the baseball stars. I can see the logic to that. I was sent this card recently by Allan who is part of the UK baseball collecting community on Facebook. Thanks, Allan! 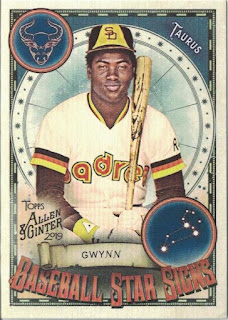 This is an absolutely gorgeous card design. 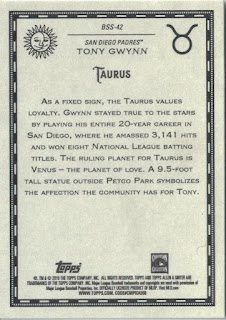 The back is a lot more relevant than the 'What's in a Name?' card from 2012, although there are several attributes for Taurus that could be applied to Tony. 'Generous' - he was given the Branch Rickey Award in 1995, the Lou Gehrig Award in 1998 and the Roberto Clemente Award in 1999, all for his philanthropic work. 'Extremely focused' - his focus on hitting caused tensions with some of his team-mates. 'Prefers simplicity' - this is a common theme in the memories people share about him in He Left His Heart in San Diego. I guess you can't include everything on the back of a baseball card and loyalty was a great part of what made Tony Gwynn special.