To celebrate their 50th anniversary in 2001, Topps picked 50 cards to reprint in a large insert series. Naturally, they included Tony's "iconic" rookie card from 1983. 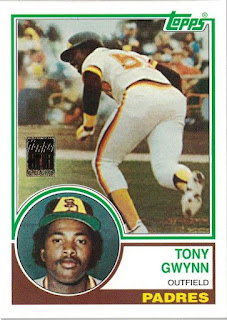 Topps added a gold foil 50th Anniversary stamp to the front. Although it's instantly noticeable that this is printed on much better card stock than Tony's actual rookie cards ever were.
Ignore the number '482' on the back - that was the number of Tony's card in the 1983 set. There is a little line below the 1982 highlights that says it's card number 36 of 50. 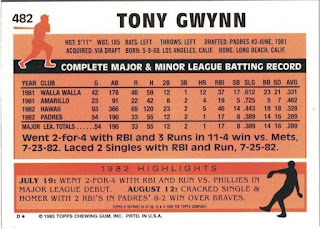 I wish Topps still did a highlight for players on cardbacks.
A few years later Topps dusted off the 1983 template again.
Card Number 753: Topps Archives, 2015; #201 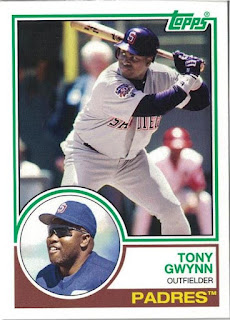 This card is in danger of setting off the Anachronism Klaxon for having photos of Tony late on in his career in the design template from the beginning of his career. If the cameo photo looks familiar, it's because it had been used by Topps before, for example, on Tony's Allen & Ginter card in 2013.
The retro styling extended to the back with the little outline of the batter next to the number. However, by this point there was no room for factoids next to the giant stats box! 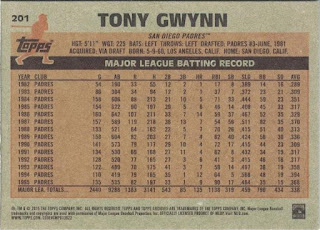 The card stock, however, was in keeping with the 1983 design.
I have a small but growing collection of reprints and reimaginings of this card (and the O-Pee-Chee version from 1983 as well). I won't be surprised if Topps print even more in future.
Total: 753 cards

Posted by Jongudmund at 8:03 AM