Filling in a base card gap

At last I have a complete run of Tony's base cards from the Topps flagship in the 80s and 90s. (Yes, I'm still missing the basic 2001 base card, despite having other versions of it.) 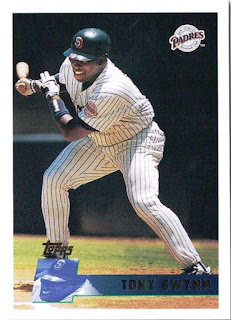 The photo on this card is proper junk wax lack-of-effort Topps in all it's glory. The picture is just simply terrible. Tony looks uncomfortable. His face isn't properly visible. His uniform may as well have been airbrushed. But for the SD logo on his helmet, this looks like an unlicensed card.
The gimmick for the Topps flagship series in 1996 was to have the player's face repeated and slightly distorted next to their name. It might just be me, but the shiny helmet and Tony's visible teeth on the decolourised distorted photo give it a slight vibe of the xenomoph from Alien.
The back is very full with a nice factoid comparing Tony to Stan Musial. 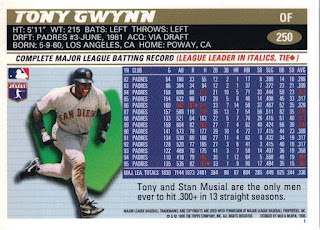 I feel Tony was repeatedly under-served by Topps's choices of photo, compared to any of his contemporaries. But at least he also the first card in the 1996 set and it was a very fancy 'Star Power' card!
Overall, my relief at finally filling the gap in my Topps binder outweighs my disappointment at this being yet another Topps card with a poor photo of Tony. It has taken me a long time to add this card to the collection and I am very pleased to be able to blog about it at last.
Total: 715 cards

Posted by Jongudmund at 7:53 AM

Email ThisBlogThis!Share to TwitterShare to FacebookShare to Pinterest
Labels: 1996, base card, Topps