I have a few cards that feature another player alongside Tony. Here are a couple of examples of Tony sharing the spotlight on 'oddball' issues.
Card Number 771: French's, 1992; #16
These cards were a giveaway linked to French's Mustard. This condiment debuted at the St. Louis World's Fair in 1904, and is still sold today. Each card in this set featured two top players. Tony shared his card with Joe Carter, who was playing for the Blue Jays at that time. 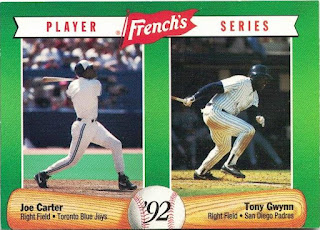 Joe was born in March 1960, almost two months before Tony arrived in the world. He was in the 1981 draft with Tony and was selected by the Cubs. After a spell with the Indians he played alongside Tony at the Padres before being part of the deal with the Blue Jays that brought Fred McGriff and Tony Fernandez to San Diego. Roberto Alomar also moved to Toronto with Joe in that deal.
That move worked out better for Joe and Roberto as both of them won back-to-back World Series titles with the Blue Jays - the first one was the year this card was given away with French's Mustard, 1992.
Depsite being the same age as Tony, Joe retired in 1998. He was inducted into the Hall of Fame in 2003, which was the first year he was eligible for entry. Being a first year inductee is yet another thing he has in common with Tony.
There is a short write up about each player on the cardback. Design-wise, I like this card for several reasons. I like cards that are green. I also like the bat and ball drawings in the background of the cardback. The photos are quite small so the player's features aren't very easy to make out. But this is still a nice card featuring two Hall of Famers.
Card 772: Classic Blue, 1990 (NL Hit Kings); #87
Are Classic cards really 'oddballs'? I think they kind of are. 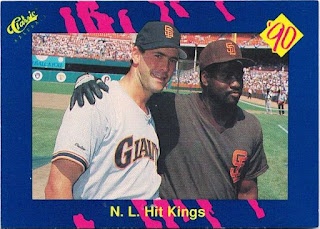 There are two versions of this card. This one that says NL Hit Kings on the front, and another version that says Clark / Gwynn on the front. Trading Card Database lists this version as 87b.
That's Will Clark next to Tony. "Will the Thrill" made his major league debut for the Giants in 1986. Before that he was in the USA baseball team at the 1984 Olympics in Los Angeles, part of the squad that included Tony's brother, Chris, and several other players who later had major league careers. In 1994 Will moved to the Rangers, and after five seasons in Arlington, had brief stints with the Orioles and Cardinals before retiring. He is on the Giants Wall of Fame and the Giants have announced plans to retire his shirt number (#22) in 2022.
This photo is slightly awkward because Will is looking at the camera and Tony isn't. Given the logos of other baseball clubs on the wall behind them (the Brewers and Phillies logos are visible) I conclude this was taken at an All Star Game with the players getting papped by multiple photographers (or at least two!) at the same time.
Classic cards were marketed as board games rather than baseball cards - which seems to have been a clever way of subverting licensing arrangements -  so along with a few stats, there are trivia questions to ask as part of the game on the back of the card. 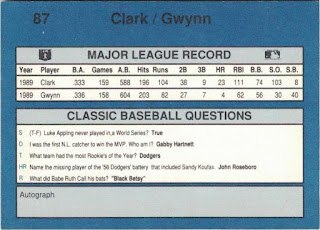 The stats compare Will and Tony's seasons in 1989. Will was .003 behind Tony in batting average so not far off winning the batting title! He had seven fewer hits than Tony but also had fewer At Bats, possible because he drew more walks. A mathematician could probably work out what the true differential of .003 would be in terms of hits. Maths isn't my strongpoint, but it feels like he was literally just a couple of hits away from taking the title.
The other thing I noticed from the stats comparison is that Will struck out over three times as often as Tony did - 103 strike outs to Tony's 30. The mind-boggling bit of that is that Tony only struck out 30 times in 158 games. I often bring this up, but on average you would have had to go to six games in 1989 to be guaranteed seeing him strike out. It always astonishes me how rarely he struck out.
Total: 772 cards
Posted by Jongudmund at 8:25 AM