Back to Base - with Bowman!

It's been a while since I've done a 'Back to Base' post. While there were some rare inserts in the parcel from France, there were also several base cards that are just a bit hard to come by over here in Europe. In this case, although they are base cards, they aren't basic. 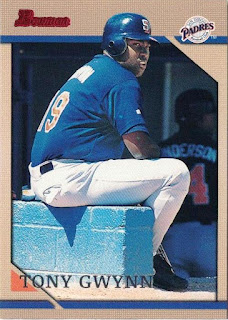 At first I thought Tony was sat on a cooler, but it's actually a low wall by the dug-out. You can just about see Rickey Henderson in the back ground. Rickey wore #24 for the Padres in 1996.
Bowman sets excelled at the statistical breakdown on the back of their cards. They ignored the conventional giant stats box and went in for real depth on the preceding season. Here is the breakdown for Tony's batting performance against all the other teams he went up against in 1995. 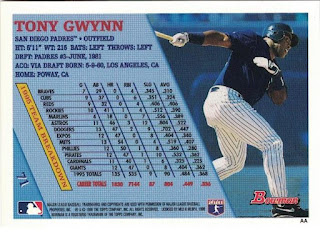 He really saved his stuff for games against the Astros, posting .522 from 46 at bats. By my calculations that's 24 hits in 11 games. He managed to top .400 aginst 3 other teams, but his bogey team that season were the Cardinals. 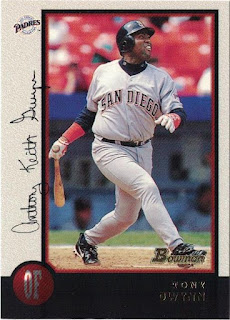 I think Tony is following the trajectory of a ball with his eyes in the photo.
The back has another statistical breakdown. 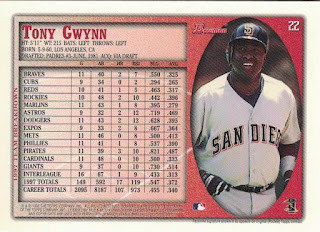 The Giants were the team he mashed in 1997. He earned a run percentage of .512 against them over 9 games and 37 at bats. He didn't really struggle against any team, although the Cubs held him to .265 as he posted a season average of .372 and picked up his eighth and final batting title. It was the second highest season average of his career.
Card Number 724: Bowman, 1999; #264
The Chrome version of this card was card #519 on my blog, way back in December last year. 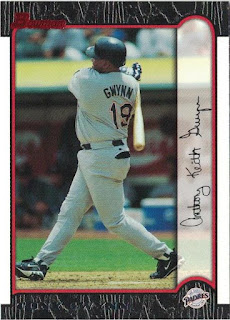 Bowman changed the format of their cardbacks, with a contemporary photo contrasted with an older photo. The contemporary photo was used on an insert series in the Topps 2000 flagship set. The retro photo looks like it's from the same photoshoot as the photos used for the All Star card in the 1985 Topps set, which is one of my favourite cards ever, and the Glossy All Star card that was included in 'rack packs' of cards in the 1985 Topps set. 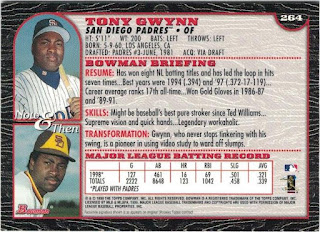 Instead of a statistical breakdown, there is a 'Bowman Briefing' with some factoids. The wording is quirky - I don't think I've heard the phrase "led the loop" before.
Bowman produced nice base cards in the 90s and these are some welcome additions to my collection.
Total: 724 cards

Posted by Jongudmund at 8:12 AM