Classic cards were ostensibly part of a trivia game, which always strikes me as a bit of a ruse to get around licensing agreements. Like all cards they evolved quickly in the early 90s, although they never really lost that flimsy card game feel. 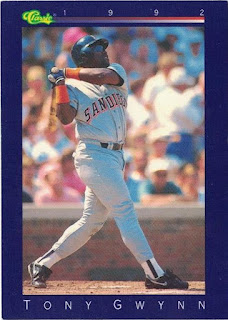 Design note: It's the 90s. Let's stretch the year across the width of the card! This kind of kerning is a mark of a card being designed on a computer.

I would argue this photo is quintessential early 1990s Tony Gwynn. Helmet and shades, watching the trajectory of a ball he has just belted up into the sunny sky, wearing the grey Padres road uniform that always looks a bit like pyjamas. The bright orange wrist guards match the orange in the San Diego name on his shirt.

The back is a change for Classic cards. Gone are the old ropey-looking cheap card backs. Note the extended kerning for Tony's name again. Justified text! Plus, five questions for you to test your knowledge. 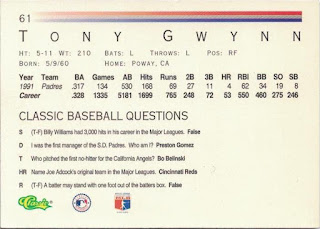 Over time, I have grown fonder of one line stats boxes. I also think it's incredibly cool that Tony only struck out 19 times in the season - what with that being his shirt number!

This card was one of the 99 that came in the actual Classic game. 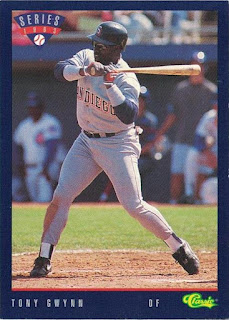 The photo in 1993 was not as good as the previous year. Tony's bat is occluding a background person's face in almost comical style.
The back has one line of stats and five more questions to answer. Plus a major howler - instead of the Padres logo there is the Angels logo! 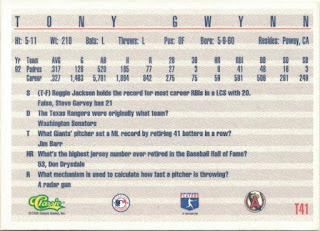