In a follow-up email, Richard also gave me some notes on the cards he sent me. He pointed out that two of the cards he had included were variations that perhaps weren't obvious. He was right, because I had totally missed them when I looked through the cards!

The cards in question were the #1 card in the Pinnacle set from 1998. They look like this. 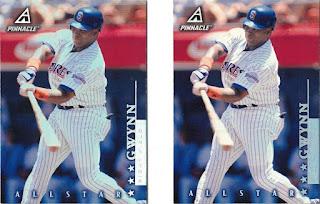 I already had this card in the Pinnacle folder, so put it to one side in the little pile of cards that I knew were duplicates. (There was some crossover between Richard selecting cards to send me and the parcel with over 100 cards in arriving from France, so there was a small overlap in contents.)

The differences are in the cardbacks! 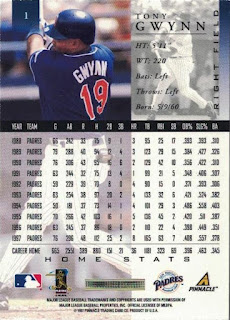 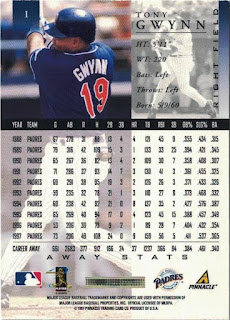 One card has Tony's stats in the games  played in San Diego and the other has his stats when on the road with the Padres. Pinnacle produced these parallel variations for all the players in the set.
Overall it didn't make much difference to Tony whether he was batting at home in the Jack Murphy Stadium or in ballparks all over the country. His career batting average differential at the end of the 1997 season was .002, from about the same number of games. He travelled well and hit well anywhere he faced a pitcher.
Thanks Richard for pointing this out and reminding me to always check the back of the card!
Total:750 cards

Posted by Jongudmund at 7:58 AM