Way back in May when I did a post about the cards DonRuss released in 1990, I included Tony's All-Star card, which was the uncorrected error version. I didn't remark on that at the time, although I did notice that the stats box contained his stats from the All-Star game, even though the header said 'Recent Major League Performance', and noted the juxtaposition. What I didn't know then, but realised soon after, was that this was a known error and a corrected version was also released.

A few weeks back I took delivery of a joblot of 80s and 90s Tony Gwynn cards, which I knew contained a DonRuss 1990 All-Star card. It didn't have a photo of the cardback, so when it arrived, I crossed my fingers and flipped it over.

It was the corrected version!

The front is exactly the same. 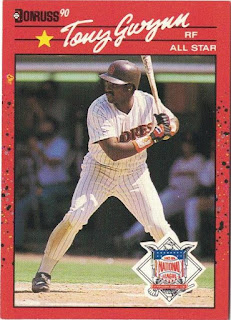 But on the back you can see that the stats box is headed 'All-Star Game Performance'. 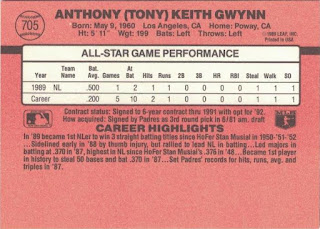 It's not the most exciting variation in my collection, but...

a) I'm pleased to have both versions as it gives me a sense of completeness,

b) it's a genuine error and correction unlike the silly fake 'errors' that are deliberately put into sets as parallels these days, and

c) it gives me another card with a red border for when I put together my sub-theme collection of Tony Gwynn cards with red borders.

So, that's three reasons why it's a welcome addition to the collection.