One card only: Price guide in your pocket

I have never seen a copy of Sports Collector's Digest, but Wikipedia reliably informs me that it once had a key role connecting collectors and helping them to buy, sell and trade cards. Like all magazines, the Internet has hit it hard. At it's peak the weekly mag was over 300 pages, but more recent copies have had fewer than 40 pages. It also has its own website with price guides and so on.

But back in the 1990s, SCD also produced their own cards. They weren't licensed (as far as I can tell) and they were produced on rather flimsy card. Billed as 'pocket price guides' they were freebies to promote the magazine.

The card design is reminiscent of those produced by actual card companies. 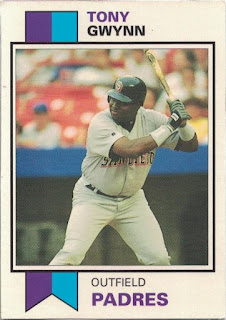 The back is a real mix of biographical data, rookie card prices, and a weird cartoon tied to a factoid. The biographical data has a mistake in it. Long Beach Poly was Tony's high school, not his college. 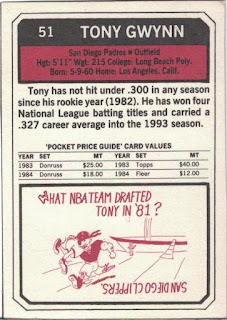 1993 was at the peak of the first boom of the baseball card collecting hobby and the prices on the card reflect that. Tony's 1983 cards from Donruss and Topps (both of which appear in my second ever blog post) are valued at $25 and $40 respectively. They haven't held their value as I'm pretty sure you could pick them both up for less than that now, 27 years later.
Tony's DonRuss card from 1984 is on my wanted list, but $18 would be well over market value now, and I don't think his Fleer card from 1984 would realise $12. If my cards were mint and still worth these values I would have $77 worth of cards sat in my binders. My cards are in good shape but the values aren't.

This card didn't cost me much either. It was an add-in on a purchase from my main card supplier, Gawain. It feels nicely ironic that it is still changing hands as a freebie bonus.

Posted by Jongudmund at 9:18 AM