Topps Turkey Red cards issued in 2020 are insert cards rather than their own set. There were 100 different cards in both Series 1 and Series 2 of the Topps flagship product, and in their wisdom, Topps decided to number them 1-100 in both series! Tony was given a card in Series 2.

Turkey Red cards are modelled on old time tobacco cards and feature a full length portrait of a player against a crudely rendered background. Their generic look is exactly like Tony's card in the set. 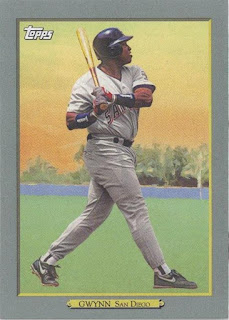 Topps haset several faux-vintage ranges, and this card has the best cardback of all of them. This is a contender for the best summary of Tony's career ever on a baseball card. 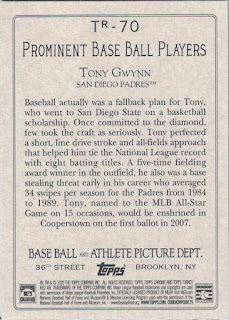 There is some artistic license taken with the opening sentence. Baseball was never the "fallback plan", although it's true that it wasn't the original plan. Tony wasn't allowed to start playing until his second year in college. When it became apparent that he would be in the draft for both baseball and basketball he decided to play baseball because he felt he would have a longer career.

However, overall, the cardback elevates this card above other retro cards released this year. Thanks to Andrew T in the UK Baseball Cards Collectors group on Facebook for sending me this.

Posted by Jongudmund at 7:31 AM