Instead of a Merry Xmas, I'd like to wish you a Merry X-Press... with a Pinnacle X-Press. (It's a terrible Christmas pun. You deserve better on Christmas Eve!)

X-Press is one of Pinnacle's less well-known card ranges. This card features a plethora of batting photos. 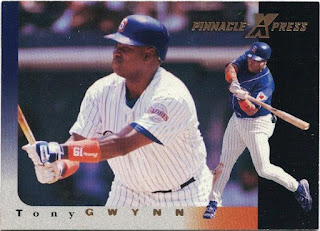 The statistical breakdown on the back shows a month-by-month summary of Tony's statistics from the 1996 season. 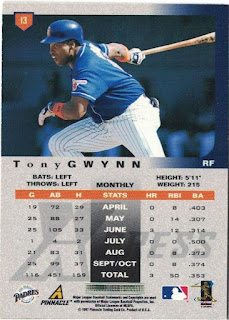 Tony played just one game in July 1996 as he struggled with a foot injury, which is why his total number of plate appearances in the year was four short of the minimum requirement to be in contention for a batting title. He still won the batting title, however, because even with four hitless plate appearances added to his total, his average would have been higher than anyone else's. (More information in this blog post.)
Have a lovely Christmas. I'm expecting coal in my stocking as punning-shment for my attempts at wordplay.
Total: 551 cards

Posted by Jongudmund at 9:57 AM