One Card Only - Hands of Gold

It's the day after Boxing Day, which in our house is called Boxing Day Boxing Day! It's also a Sunday so that means it's one card only, and today's card honours Tony's fielding skills. 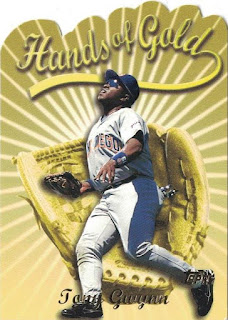 Tony often talked about how he had to work on his fielding when he started playing professionally. As with his hitting, his incredible focus paid off. He made very few errors in the outfield and in some seasons recorded a fielding percentage as remarkable as his batting average. In fact, in two seasons when he was batting champion, he also won a gold glove! 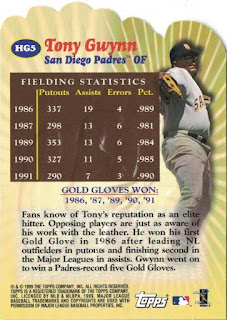 To date I think this is the only Tony Gwynn card I have that honours his skill and dedication as an outfield player. Several Padres have won Gold Gloves since Tony's fifth award (including Trent Grisham in 2020), but Tony is still the franchise leader.
Total: 553 cards