Modern Monday in the Museum

I received this card from Graham, alongside the Gold Label cards I blogged about a couple of weeks ago.
Card Number 533: Topps Museum Collection (copper parallel), 2019; #81
Topps Museum Collection is one of those high end sets that I rely on other people buying boxes, breaking them, and then wanting to sell on some of the cards to try and make some of their money back.
Personally, I think this 'copper parallel' with its brown frame looks nicer than the regular Museum cards. But I have that sense of incompleteness that I get when I have a parallel and don't have the vanilla base version. 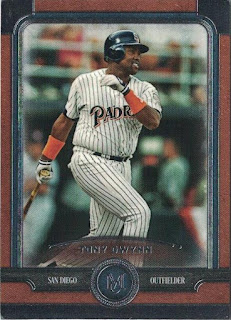 If you ever want to know if a pin-striped Padre was photographed in the 80s or the 90s then look for the colour in the word Padres, and the colour of the batting helmet. Brown = up to and including the 1990 season. Blue = from 1991 onwards. It's a slight shame that this copper parallel isn't framing a photo of Tony in a complementary brown batting helmet.
The write up on the cardback is suitably 'museum-y', mentioning "the game's annals". 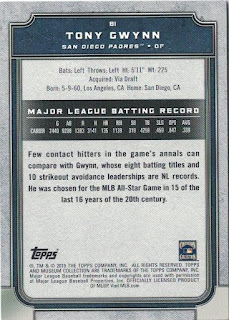 Topps have also found a new way to package information. I hadn't seen Tony's All Star appearances presented that way before - 15 appearances in the last 16 years of the 20th Century. Fair play to Topps, they have found a way to phrase that which sounds very special.
Total: 533 cards
Posted by Jongudmund at 8:10 AM