One Card Only - Pacific Prism 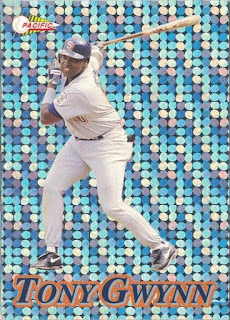 There were three kinds of Prism insert cards in Pacific's first Crown Collection series - Gold, Silver, and Silver Circles. These are shiny and yet scan really well. It's one of the earliest cards to feature Tony as a cut out image with no background.

Although these were inserted in the Crown Collection set, they just carry the regualr Pacific logo of the time. The cardback is bilingual and features another cut-out image of Tony. 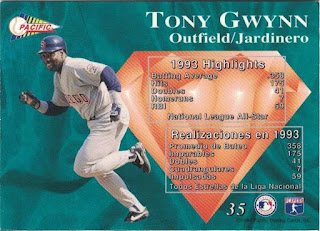 The giant gemstone is meant to be a visual pun on 'diamonds' as in baseball fields. It creates an orange and turquoise combo that is very early 90s in its colour scheme.

Pacific produced Prism inserts in various card ranges from 1994 through to 2000 when the company lost its licence to produce baseball cards and abruptly ceased trading. Nowadays this sort of shiny effect is commonplace, but when this card was released this was the kind of innovation that gave Pacific a but of an edge in a crowded marketplace.