After the gold shininess of last Sunday's card, here's another shiny gold card to brighten up your day.

Trading Card Database records the print run on these cards at 37,500, which is presumably where the 'limited' bit in the set name applies. 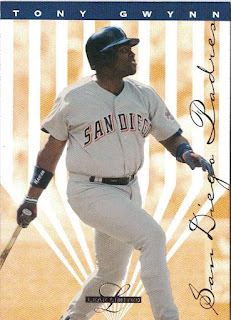 This card includes three images of Tony, which are all cut outs. The career stats are strange because it gives his monthly averages over his career. Looking at this it would seem his performances always peaked in June as that's the month he had made the most hits, scored the most home runs and batted in the most runs up to this point in his career. 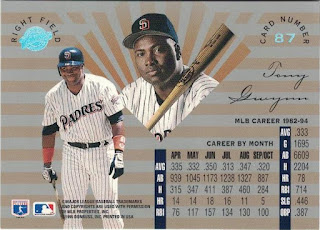 Tony's preeminence in June isn't that much of a surprise given that was probably the month of the year he was least likely to be hampered by injury. He missed a few starts and ends of seasons in his career. He had also lost half an August and September the season before this card came out so that may have impacted his totals for those months.

The other thing to note is how close his career batting average was to his career slugging percentage at this point. (That also got higher - increasing to .457 for his career when he retired.)

The difference between batting average send slugging percentage is the number of extra bases scored. Tony was never a massive power hitter - he collected several doubles and triples and a few home runs each season, but most of his hits were singles. Get the ball in play. Get on base. He was a Moneyball player before Moneyball, and if he had been active a decade later when Moneyball took off, I think he would have been in high demand.

I realise that's all speculation, but it does make me wonder how things may have been different for Tony if he hadn't been playing during the fascination with home run records and power sluggers, and had been active when his key skills became, briefly, the most prized skills in baseball.