One of the few honours Tony never picked up in his career was the MVP Award. In fact, he felt not winning it would count against him in the Hall of Fame ballot.

The lack of the actual award, notwithstanding, Tony often featured in sets called MVP. Here are a couple of examples.

28 players had a MVP insert card in the DonRuss flagship set for 1994. 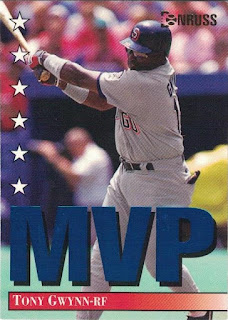 Tony has a bit of an odd expression in the photo on the cardback. 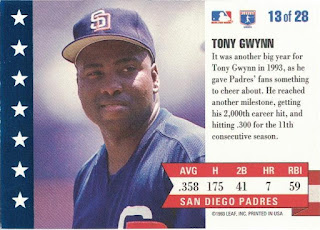 There's some irony in the write up on the cardback as it describes 1993 as a big year for Tony, when 1994 was of course the year he set the modern-day record for batting average. It also notes his 2000th hit.
Card Number 530: Upper Deck MVP, 2001; #271
The MVP sets were smaller baseball card sets from Upper Deck. Tony is poised to run in the photo on the front, although that does mean he is captured in an odd pose. 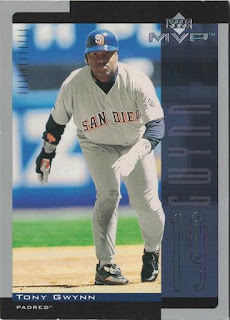 On the back, Tony is described as "venerable", which is fair enough considering this was in the final season of his career. 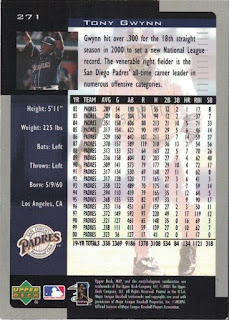 Apart from the word 'venerable', there isn't much otherwise of note about this cardback.
Total: 530 cards

Posted by Jongudmund at 7:29 AM