Modern Monday - got your number

This card from the recently released Topps Update set came all the way from Plymouth, Massachusetts, via eBay. Then, after I'd bought it and while it was somewhere in the postal system, Marc from the UK Facebook collectors group asked me if I had it. The lesson? Wait and see what turns up in the group!

The theme of this insert set are the various numbers retired by clubs. 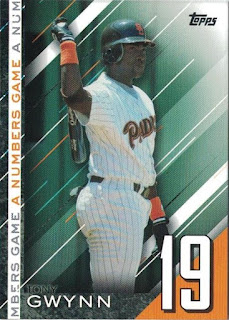 If that picture on the front looks familiar, it might be because it appeared on an insert card in Topps Chrome Update in 2019. 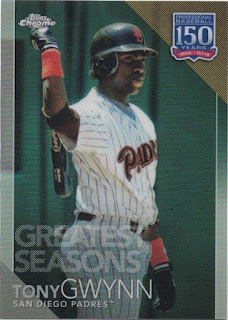 On the back there is a little write up about Tony's career. 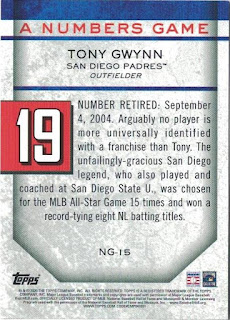 I have one quibble with this insert series - why didn't Topps try to align the card numbers with the retired numbers? NG-19 in the series is Ernie Banks, who wore #14. They gave Derek Jeter's card the number NG-22, but his uniform number was #2, while NG-2 is a card for Ryne Sandberg, who wore #23.
Yesterday I talked about how I felt Topps's licensing monopoly had rendered the company lazy. This is the kind of thing I mean. I realise it might not always be possible to number all the cards exactly aligned to the shirt numbers of the players. But Topps could have done that with a lot of them.
Total: 547 cards
Posted by Jongudmund at 9:26 AM