I am reaching the end of my stockpile of Tony Gwynn cards and seem to have ended up with a few odd ones that don't really fit into a themed post, like these Upper Deck cards.

The stat leaders card is relevant to this blog because it commemorates Tony's .394 score in 1994. The blue foil SE logo marks this out as part of the Special Edition set. 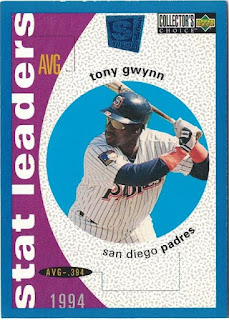 On the back we have all the leading hitters across both leagues in 1994. Tony was .026 more prolific than Jeff Bagwell, who had the next highest average. 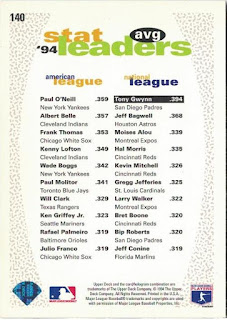 Looking down the list of other players, it feels very odd seeing Wade Boggs listed as a Yankee, but he spent five seasons and won the World Series with them in 1996.

UD3 was a high end card range brought out by Upper Deck that went heavy on emphasising its use of "unique technologies" on its cards. Tony's card was a PROmotion [sic] card that featured "Light-FX" - an effect that doesn't scan very well. 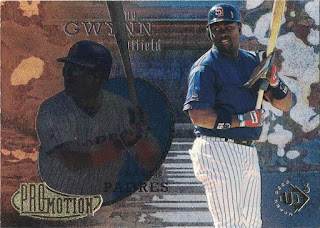 This wonky photo captures the colourfulness of the cardfront better. 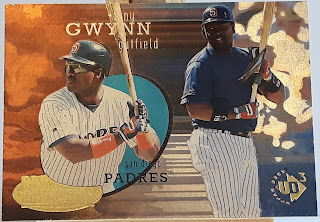 The cardback isn't treated with the same coating. It predicts Tony has a place reserved in Cooperstown - he entered the Hall of Fame ten years later! 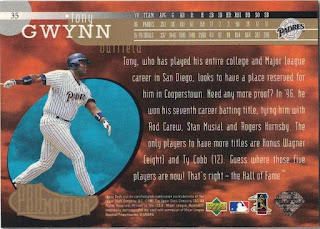 This set from Upper Deck was composed of retired players. There were 90 cards in the set and 69 of them were Hall of Famers, or have been elected since the set was released. Tony was included in the set two years before he was elected. 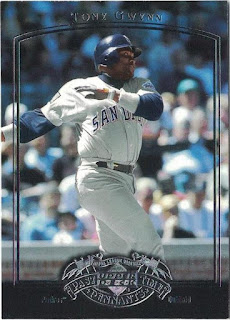 The cardback lists Tony's five best seasons and it's notable that three of them were grouped between the 1994 season and the 1997 season. 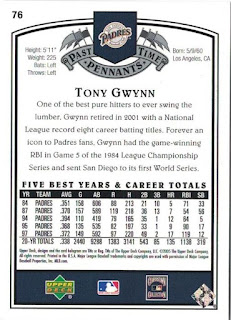 Although I sometimes comment negatively about truncated stats boxes on cards, this works really well in this kind of set that features legends of the game.
Total:545 cards