One Card Only: life without logos 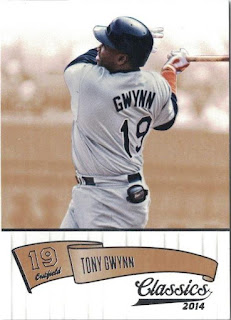 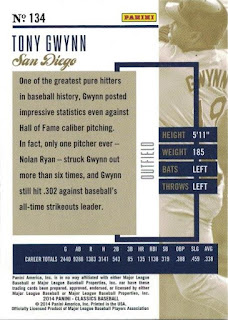 Panini have been producing cards without a Major League Baseball license for a number of years now. They have signed contracts with the Major League Baseball Players Association (MLBPA) and with the National Baseball Hall of Fame and Museum, so they have access to photos and player likenesses. But they can't include the franchise name or any franchise logos.
And so we get cards like this. But looking at this objectively, there is nothing particularly bad about this card. You can see Tony's name and number on his shirt and as much of his face as is visible in, say, his Topps base card from 1987 or the main photo in his Topps rookie card from 1983. In terms of visible logos it is about parallel with the Topps Stadium Club card from 2020, which was a fully licensed card.
Panini are operating at a disadvantage, but, honestly, with the exception of the word 'Padres' not being included, this card is absolutely fine. It's nicely designed. The cardback is neatly laid out, and includes a factoid that I didn't remember until I read it. The set year is included on the front (bonus point!), and this is actually one of the few cards issued the year that Tony died.
I have mentioned this a few times when reviewing Panini output - they own the DonRuss stable of brands and now produce the Diamond Kings cards as Panini Diamond Kings - but given what the company achieves without a MLB license, it would be very interesting to see what Panini could do if they had a license that meant they didn't have to airbrush batting helmets and shirt sleeves to remove logos.
Only one card company - Topps - holds a MLB license at the moment. I don't think that is particularly good for the hobby. For one thing it limits innovation. Very few major advances in card production have been introduced into the hobby by Topps, and those that have were introduced in reaction to pressure. In fact I'd go as far as saying that being the sole licensee isn't just bad for the hobby, it's also bad for Topps. They don't need to try as hard, and so, let's be real, they don't.
With the exception of the Topps 2020 product this year, and that product is divisive among collectors, there has been little to show that Topps are the dominant card company. Their flagship set was OK, their archives set wasn't bad, but their other sets like Allen & Ginter and Gypsy Queen are looking tired. Museum, Gallery, Gold Label... they feel like they are treading water. And the decidedly average UK Edition was welcome for being baseball cards released in the UK (hurray!), but has a weaksauce checklist and an England-centric insert set, which I'll be blunt, turned a "United Kingdom" edition into an "England Only" edition. (It's not like Topps don't know Wales exists -  there were two Welsh castles in their Allen & Ginter fortresses subset!)
The Panini Classics card in this post is six years old, and it shows that Panini have known what they are doing for some time now. Despite being at a tremendous disadvantage, they are not as far behind Topps as Topps would like. It may seem counter-intuitive, but maybe the way forward for the Topps company is to relinquish their monopoly on the MLB license and allow other companies to compete on level ground. I think that would help Topps to rediscover the need to innovate and explore new things. There would be risk, but that will keep them sharp.
It would also be good for the hobby, and what is good for the hobby will also be good for Topps.
In the meantime, if you can bear cards without logos, Panini cards are less expensive to collect, and are often more interesting too. If you collect a player, like I do, then the pictures on the cards are what matter, and they tend to be as good as the pictures that Topps choose anyway. With the archive of DonRuss, Leaf, Score and Pinnacle templates available to them, Panini can match Topps in the nostalgia stakes as well.

And if they produce cards that are as nice in hand as this one, I will be happy to add them to my collection.

Posted by Jongudmund at 8:43 AM