Here's an illustration of how a run-of-the-mill set could get stuffed with Tony Gwynn cards for collectors like me to accumulate. For some reason I hadn't already blogged about Tony's Fleer cards from 1997, and then a recent purchase from Russ, who was selling off his baseball card collection, brought me two more cards from the same set; a veritable fistful of Fleers.

First up, Tony's base card:

I love this picture with the disembodied hands reaching down over the dugout wall with things for Tony to sign. 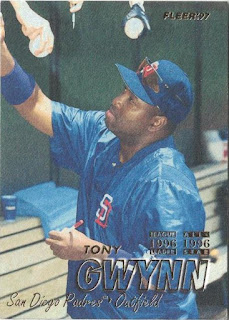 The card has a matt finish, which is unusual for a full bleed card. Fleer have included the set year on the front (bonus point!) and noted that Tony was a league leader and an All Star with little embossed prints. 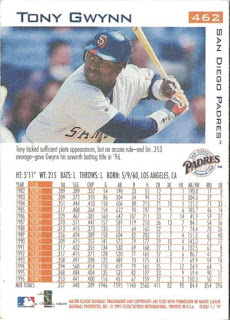 There's a bit of controversy in the factoid - "Tony lacked sufficient plate appearances, but an arcane rule... gave Gwynn his seventh batting title in '96."
I did the bare minimum of research to find out what that arcane rule was. Here's an explanation, couirtesy of Wikipedia:

"if a player's lead in AVG is sufficiently large that enough hitless at bats can be added to reach this requirement and the player still would have the highest batting average, he wins the title. Tony Gwynn, for example, had 159 hits in 451 ABs in 1996 (.353 average) but only 498 PAs. Gwynn's batting average would have dropped to .349 (159 hits in 455 ABs) with four hitless ABs added to reach the 502 PA requirement, but this would still have been higher than the next-highest eligible player (.344 average), so he was awarded the 1996 NL batting title." 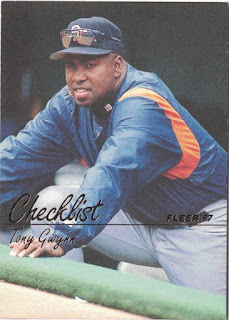 Why would anyone complain about a checklist when checklists look this good?
It's a team checklist for Series 2 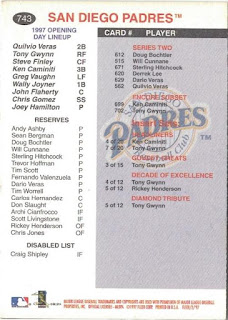 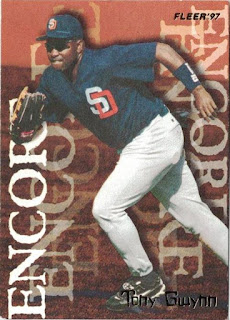 The card is very orange.
The back looks similar to the regular base set, but the reference to "arcane" rules has been replaced with some number-crunching about Tony's hitting stats in the final third of a game. 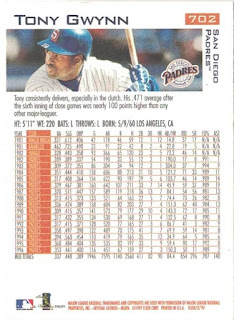 Tony's consistency in the 'clutch' is probably down to him getting used to a pitcher by the sixth inning of a game - he recommended batters watched pitchers throwing their practice pitches and to any players ahead of them in the order to maximise the likelihood of being able to hit off them.
Tony was in among the inserts in the 1997 Fleer set too.
Card Number 528: Fleer (Headliners Insert), 1997 #7
The Headliners cards featured 20 players who made headlines the previous season. 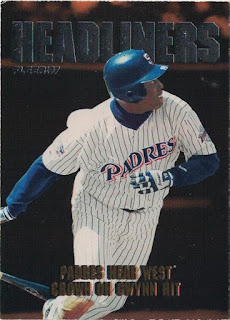 In September 1996 the Padres went into a 'winner takes all' series against the Dodgers to decide which team would be Champions of the National League West. The Padres swept the season. 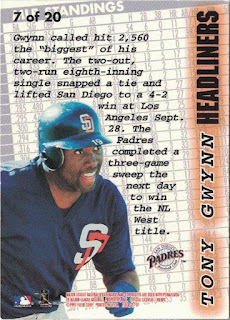 What's notable (to me, anyway), is that the game after the game mentioned on this card, which decided the Championship, was won by Tony's brother Chris. He was on as a pinch hitter (replacing Greg Vaughn), and his two-RBI hit in the 11th inning brought the Championship pennant to San Diego, and took the Padres into the post-season for only the second time in their history.

That could have been mentioned on the card, but by 1997 Chris had retired from Major League Baseball and it looks like his exploits had already been forgotten.

I hope you enjoyed this fistful of Fleers. Thanks for reading!

Posted by Jongudmund at 7:21 AM