Three cards today, all released by DonRuss in the year the Padres last reached the World Series.

DonRuss flagship sets were using full-bleed images by this point. The orange and blue stripes at the bottom are reminiscent of a circus tent. 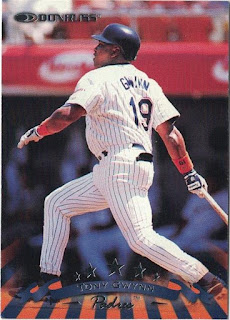 On the back, we have a contender for best photo on a cardback ever. It's maybe just exceeded by the one Pinnacle used on their 'New Pinnacle' card in 1997, but it's close. 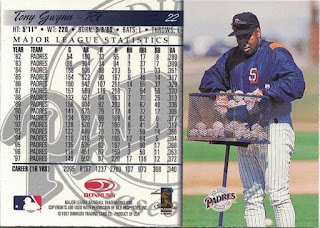 How many Hall of Fame, record-setting, multiple All-Stars, would bother collecting up the balls after batting practice? Tony has got them scooped up in his jacket and is just about to dump them into the ball box.
Is there a more human moment captured on a baseball card anywhere?
Card Number 536: DonRuss, 1998; #167
Tony is the featured player on Checklist number 2 in the set. There is a point when checklists aren't really checklists. 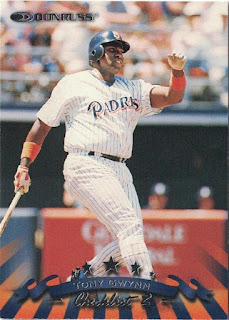 There are some good names on the back of the card. Derek Jeter is #100 and there are several Hall of Famers or contenders for the Hall of Fame. It's a bit odd that all the names are superimposed on a Padres logo. DonRuss could have used their corporate branding as the watermark. 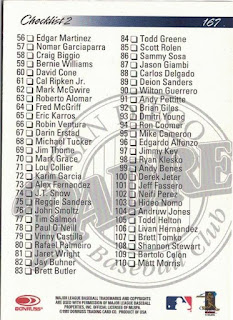 Card Number 537: DonRuss Preferred, 1998; #175
Given the shininess of this card, I think "Preferred" was DonRuss's version of Topps Finest and other shiny card sets. It doesn't really scan very well. 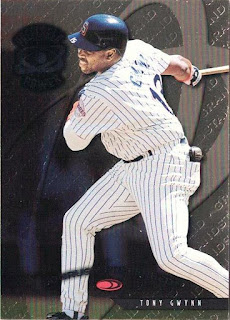 The double hoop motif that frames Tony's cameo portrait on the back is the set logo for DonRuss Preferred. The write up is about Tony not hitting many home runs. 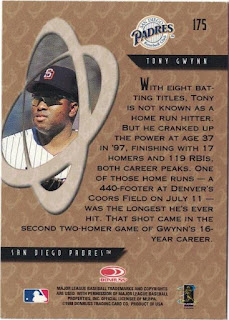 1998 was the year that Mark McGwire and Sammy Sosa were both chasing the record for home runs. That interest had been building ever since Albert Belle topped 50 home runs in 1995. Ken Griffey Jr and Mark McGwire both topped 50 home runs in 1997 and there was a lot of expectation around the record set by Roger Maris in 1961 finally being surpassed.
So, it's perhaps not surprising that DonRuss looked at Tony's home run records. Given the hype that was around home runs, his numbers had increased in 1997 as well. He never recorded more than the 17 homers he hit in 1997 - although he did notch 16 in 1998, the year this card was released. The 33 home runs in those two seasons made up a good percentage of his career total of 135 home runs.
Total: 537 cards