Hanging with the rookie class

I've been thinking a bit about the future of this blog. It started back in May as a 'lockdown project' and I have posted every day since then. I wasn't anticipating it being a daily blog as I had less then 200 Tony Gwynn cards when I started. I imagined I would blog the cards I had and then blog more when I acquired them. However, I have been blessed by some great contacts who have supplied me literally hundreds of cards between them.

At this point in time, though, I am actually nearing the end of my unblogged cards, and so I think in January I will be heading into 'occasional blogging' mode, as and when I add new cards to the collection. I have a few other bits and pieces related to Tony Gwynn that could feature. And I have toyed with the idea of a virtual "Frankenset", which might be fun.

However, as I said, I am finishing up the collection of unblogged cards, and have two cards here that have a similar theme.

This card set had 192 cards in it, and 47 of them were serial numbered cards of rookies. It was released at the end of the season. 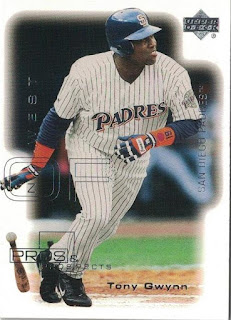 On the back, Upper Deck opted for the confusing 'put the player's uniform number where you would expect to see the card number' design choice. There are also some issues with the kerning in some lines - ah, the wonders of justified text! 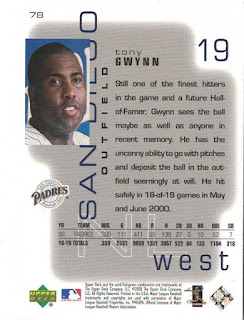 Other companies released sets that covered similar ground to Pros and Prospects. Including, Leaf...

Leaf were a bit more obvious about what the set was about than Upper Deck. Again, the setlist was heavy on rookies - 148 out of the 300 base cards were rookie cards. 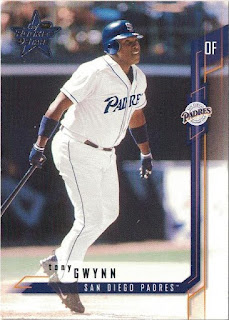 The airbrushing effect at the bottom of the card makes Tony look like he is skipping.
There's an orange tone on the cardback. And another entry in my collection of cardback descriptions of Tony: "A field general at the plate". It also decribes Tony as being "on deck" for the Hall of Fame. 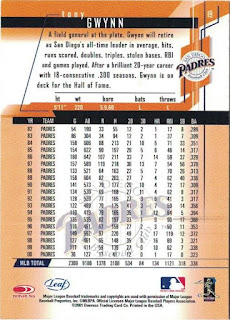 Leaf also get 19 bonus points for having this as card #19 in their set!

Posted by Jongudmund at 8:30 AM