Happy Boxing Day. Just the one card today and I chose it because, well, I didn't have any Skybox cards left to blog, and it sort of has a box as part of the design.

Ionix was a weird card range that Upper Deck released at the turn of the Millennium. I have featured one of the cards from the 1999 set previously. This card came from eBay.

The box saying Gn 19 looks like a box from the Periodic Table. This gave me an idea - a Periodic Table of baseball players! Then I googled it and found it has already been done. 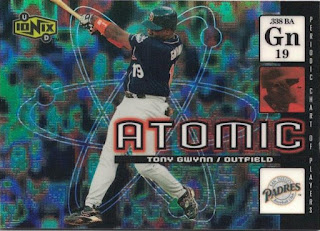 The cardback has a sciencey-looking chart for Tony's batting average. Graphs on baseball cards are a bit of a niche interest for me. 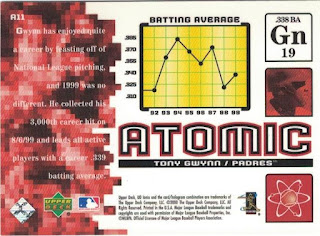 I also really like the font that Upper Deck used for the word 'Atomic' and it's much clearer on the back than the front. I'll give this card a bonus point for that font. (One day, when I have some free time, I will actually get round to scoring the cards in my collection.)

Posted by Jongudmund at 9:38 AM