Among the cards I bought recently from Russ, was a Powerdeck CD-Rom card. I've already blogged a Powerdeck cardboard card (100 cards ago!), and when I did I said I was going to keep an eye out for the CD-Rom, which was actually the "base" card in the set.

The CD-Rom is trading card sized and comes in a plastic sleeve. 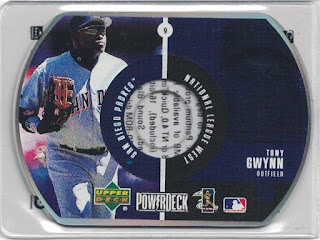 The 'back' is printed on the plastic sleeve and is the system requirements for running the CD-Rom. 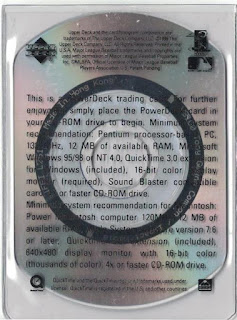 I happen to have an old PC, which is relatively reliable and so I haven't replaced it since I bought it in 2010. It has a CD drive so I thought I would see if this would play. Unfortunately the CD tray is mounted vertically. That's not a problem with an ordinary sized CD, however when the tray went in with the Powerdeck disc on, there was a rattling sound and the disc dropped into the machine.

Fortunately I was able to retrieve it with a pair of tweezers. Even more fortunately I had an external CD/DVD drive that I could plug into the computer that was flat so the disc couldn't fall anywhere.

I loaded the disc into the tray and it worked!

For people who are into this sort of thing, these are the files on the disc.

Considering there is less than 12mb of information on the disc, the whole thing works really well. There's an animated title screen, leading to a mini home-page. 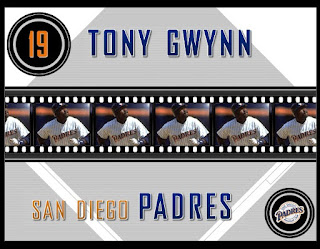 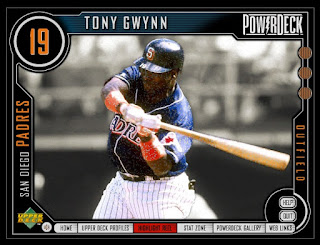 The menu across the bottom reads Upper Deck Profiles, Highlight Reel, Stat Zone, Powerdeck Gallery, and Web Links. The disc loads with the Highlight Reel, erm, highlighted (as shown), and a small film clip kicks in after a few seconds.

The Highlights start with Tony's 3000th hit and then segues into a sequence of more hits, accompanied by some punchy music. I didn't time it, but the film clip probably lasts about 30 seconds or so.

The Upper Deck Profile is quite detailed and runs over two screens. 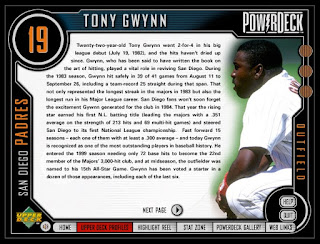 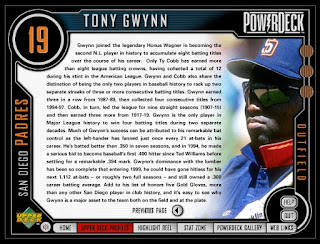 There are 10 photos in the Gallery. Each one illustrates an aspect of Tony's career. I screenshot this one because it contains the kind of ludicrous hitting statistic that I know Fuji loves as much as I do! 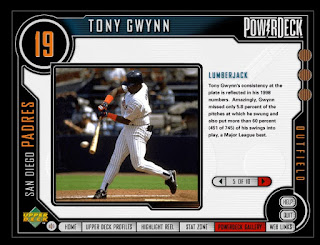 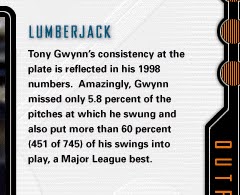 There's a challenge - name another player who missed less than 6 per cent of the time he swung at a pitch!
The Stat Zone has a short animation that dissolves into a fairly standard-looking stats box. I didn't bother doing a screengrab.

And finally there is the screen of web links. The three linked sites are the MLB website, the now defunct players' website, and the Upper Deck website. 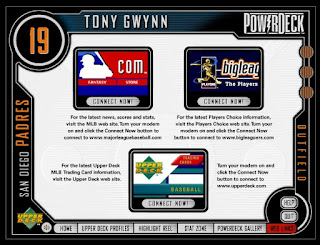 I was particularly taken by this instruction on the screen! 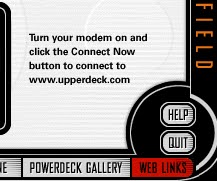 Ah, remember the days when you would turn on the computer and then turn on the modem and hear it's weird burbling scream and clicking as it tried to engage the world wide web. I know it was the last century, but this just reminded me of how 1999 was a technological epoch ago.

Overall, I was impressed by this little CD-Rom. There was certainly enough content on there to make it worth the hassle of trying to make it work. Back when it was released it must have felt very futuristic and novel. So it's kind of funny that the main thing it's triggered in me is nostalgia.