It's a bank holiday. Here are two cards from 2020 for you to enjoy today.

Dean from the Baseball Cards UK group on Facebook busted lots of Topps Flagship and sent me this. 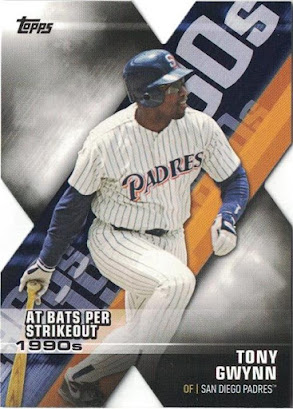 Tony earns his place in the 1990s pantheon as a dominant batter because he rarely struck out at the plate. How rarely I hear you ask... 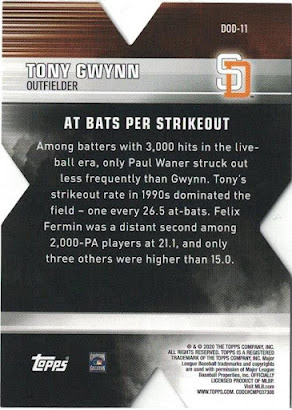 One in every 26.5 at bats, according to the cardback. Given that Tony would usually make around 5 plate appearances each game, that would mean you would only see him strike out one game in six.

This was a whimsical purchase on eBay.

I didn't actually clock this was a gold parallel version of the card until it arrived. It has a slight gold sheen to it. 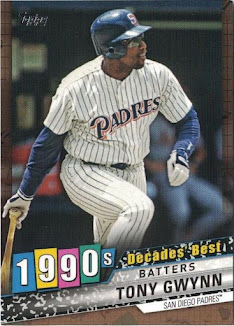 The way Topps have written 1990s in the coloured blocks there is probably the best bit of design in a Topps flagship product in the last five years. I'm happy to be corrected on that point, but I can't remember seeing anything else that was so bang on. It just screams "Now That's What I Call Music" albums from the start of the decade. (These were compilation albums released in the UK that featured chart-topping singles released over six months or so - everyone I knew had at least one "Now album" back when I was a teenager.)
There's a succinct summary of Tony's career in the 90s on the back. Note how his batting average for the decade was higher than for the previous decade. 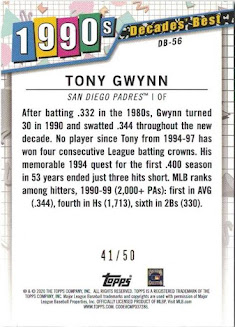 You can also see there that this card is numbered out of 50. I doubt the person selling it realised it was a short print parallel because it didn't me cost very much. I like numbered cards so the numbering counteracts my usual disdain for parallels.