Fleer Ultra was Fleer's other big card range for just over a decade, surviving the transition of ownership to Marvel, the merger with Skybox, Marvel's bankruptcy fire sale, and the restoration of the company in the late 90s. It was a range that competed in the Upper Deck / Stadium Club market, although all flagship products were soon featuring the fancy elements that set those ranges apart, like photos on the back and foil embellishments.

I was tempted to put this selection out of chronological order so that this card number matched up to my numbering system. 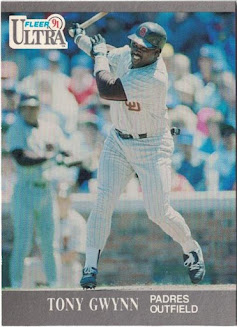 Fleer had quite a thing for grey at one time, and considering this was their exciting "Ultra" range, it's a dull framing colour.
The back makes up for it. 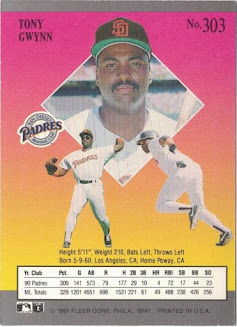 That colour scheme right there? That is 1991! I am getting flashbacks to Global Hypercolor t-shirts, alcopops and cassette singles just looking at it.

I've mentioned awarding points to cards. This would get a bonus point for having the year in the set name on the front. I'd also give it four bonus points for having four photos, and for them all showing a different action - batting, base-running, throwing from the outfield, and posing all cool like. 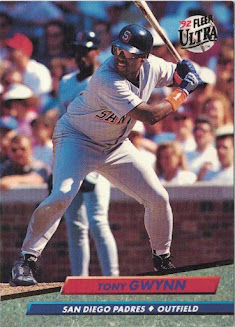 I often wonder about the crowd in the background in early 90s baseball cards - there must be someone somewhere who gets this card out to show people how they were on a baseball card once. That guy in the red hat really stands out. 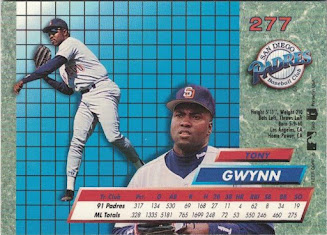 I'm not sure what's going on with the graph paper background on the cardback. Although it is a card from 1992 and that does look like turquoise, the trend colour from 1992!

I'd also award points, if I awarded points, for sensible statting. This is a slimmed down stats box, which is OK by me. I have an all-or-just-last-season attitude to stats boxes. The bio data text is printed way too small though. That's the size font that should only be used for boilerplate text. about copyright.

Another Stadium Club-esque card. The baseball in the logo is on fire! 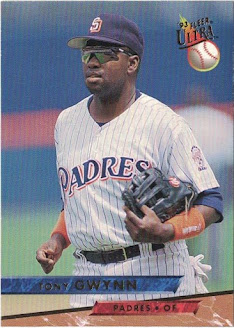 This looks like Tony is jogging either to or from the outfield at the end of an innings. 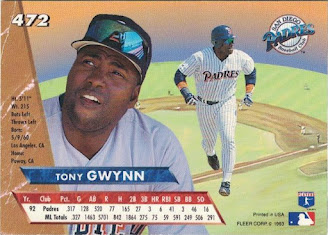 They ditched the graph paper on the back and there is a drawing of a baseball diamond instead. It's less futuristic and that makes it look less dated 27 years on.

There's a bit of foil on this card to make it a bit more flashy. 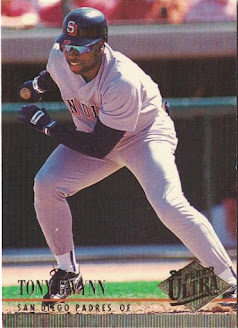 The fronts of Fleer Ultra cards are a bit samey between 1992 and 1994. Thankfully the backs are all really different. This year they went back to bright orange! 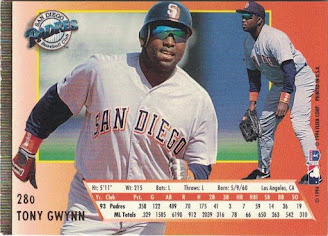 The smaller cut out photo is a bit unusal, showing Tony poised and alert on fielding duty.

If you want to see another Fleer Ultra card, you can see one in last Friday's post. Otherwise, you're going to have to wait until tomorrow!

Posted by Jongudmund at 8:02 AM