In 1994 through 1996 Upper Deck decided to release every single card in their sets with 'silver signature' versions that included printed signatures in foil. Here are the 1994 versions of Tony's base card. 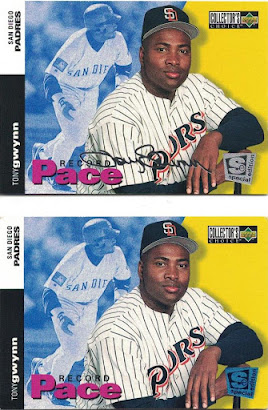 I've scanned these together as they came in the same bulk lot. The silver foil signature doesn't show up well. 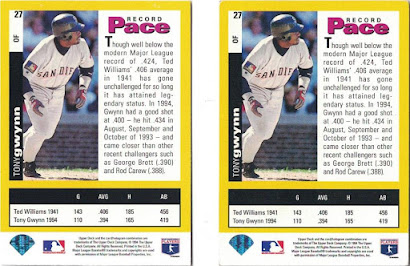 The backs are completely identical, and explain how close Tony came to scoring .400 in 1994. They also compare his statistics with Ted Williams's record-setting season in 1941. It's noticeable how Tony had fewer at bats than Ted when those seasons are compared head-to-head. Tony was coming into form in July and early August before the player's strike ended the season prematurely. Whether he could have topped .400 for the season is one of those great 'might have been' questions. 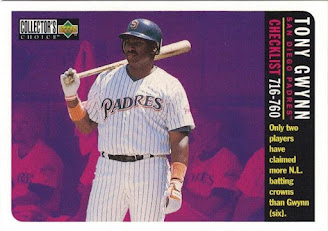 I didn't scan these cards together, which is one reason why I have literally only just noticed that the Silver Signature card has a silver border as well. 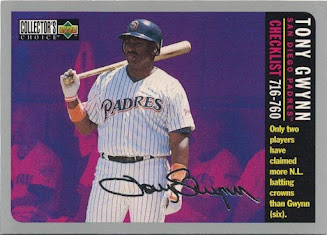 Tony was still only on 6 batting titles back in 1996. He got his seventh that year.

There is no difference between the cardbacks, although the one I have without a signature has a slight dirty smudge on it. 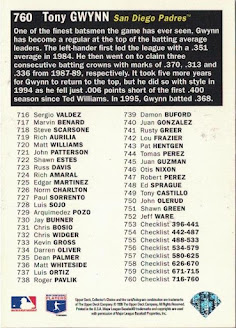 There's a concise summary of Gwynn's career to date on the cardback as well. At least it makes the checklist more worthwhile to collect. 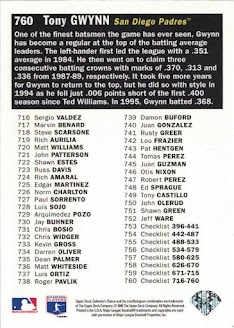 So far, this is the first Tony Gwynn card in my collection to be the final card in a set. He's been #1 a few times, but not the ultimate card!