I'm not planning on too many 'theme days' but I was looking at this card for the Monday Mixer and when I saw that it had a mistake on the back, I decided to keep it for a second fact-check Friday post. It's not as big a deal as getting the date of Tony Gwynn's 3000th hit wrong, or ageing his mother into his grandmother, but it's one of those little goofs that remind me of the importance of double-checking what you do. 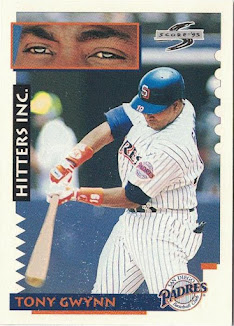 The eyes on this insert card make it a bit of an odd one. There are 22 cards in the Hitters Inc. section of the Score set from 1995 and they all have the batters eyes cropped into a little box at the top of the card. It looks weird.
It's also not a great photo as Tony is looking down so you can just see the top of his helmet. The Score layout guys who chose the photo have obviously been channeling their inner Topps!
But then there's the back, with a much better photo and a nice little write-up. But can you spot the mistake? 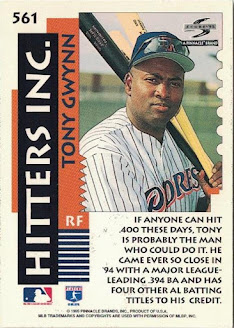 They got the league wrong. Tony never won an AL batting title. All eight of his titles were won in the National League.

This card acts a timely reminder to always double-check your facts, otherwise 25 years later somebody might come along and write an entire blog post about your mistake!

Posted by Jongudmund at 8:18 AM