One Card Only: Walking the Big League Beat

The Big League Beat was an insert series in Upper Deck's 2001 set. It was a faux newspaper with a story from the previous season. 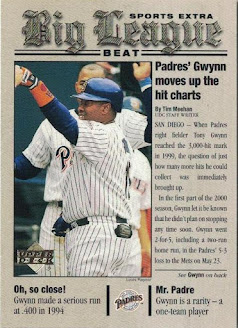 The lead 'story' is about Tony Gwynn adding to his 3,000 hits. The story carries on over the back and mentions how he overtook Cap Anson in the all-time rankings for hits. The two little headlines on the front refer to the 1994 season when his batting average was .394, and Tony only playing for the Padres. 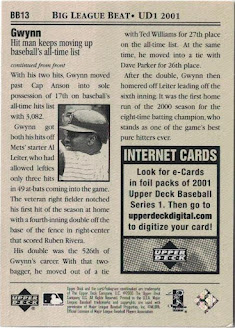 The little 'advert' is a big cultural marker. Few things scream 'turn of the Millennium' more than an attempt to get people to go online and visit your website for the thrill of digitizing your card! (In a previous blog I've talked about how one of my first Internet experiences was trading card-related.)

According to the Wayback Machine, back in 2001 Upper Deck also offered an option to order personalised cards of yourself in whatever Upper Deck card template you most liked. It's a service that is still offered by some companies today, almost twenty years later.

In other news, I now have a wants list!