Three cards to brighten your Monday, sort of continuing the faux vintage theme from the weekend.

This is from the same set as the mini relic in yesterday's post. The front has been made to look like it's been drawn through the application of a Photoshop filter. 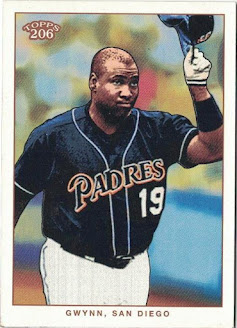 Given Tony had just retired at the end of the previous season, this choice of picture is very apt. It's as if he is raising his cap to the fans and saying goodbye.
The cardback follows the same theme, describing Tony leaving the game. 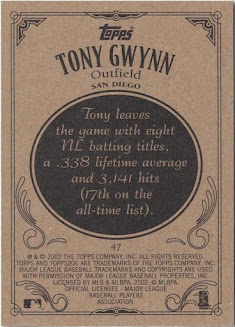 Tony has dropped to 21st on the all time list for hits since this card was printed. He has been overtaken by Albert Pujols, Derek Jeter, and Adrian Beltre, but Topps's claim that he was 17th is mysterious. Everyone else on the list retired before Tony did, apart from Cal Ripken Jr who retired the same year. I think this is a mistake by Topps and they forgot that Cal Ripken Jr had more hits than him.

Nowadays Turkey Red is an insert series in Topps's flagship product, but back in 2005 it was its own set of 330 cards. 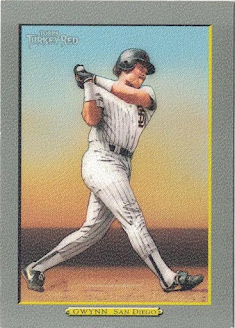 The back has a tidy summary of Tony's career, probably the best one to be found on a Topps cardback. 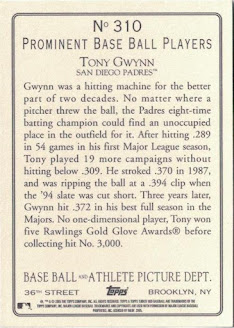 And now let's take a trip back to the late 90s. From 1997 - 2001, Topps released Topps Stars sets. They were small sets, never more than 200 cards, and had lots of things like foil parallel versions. This, however, is an ordinary base card. 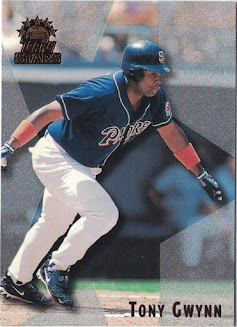 That front design looks almost as dull as a turn-of-the-century Fleer single-season set.
The back has a bit more character, including star ratings across a number of metrics. 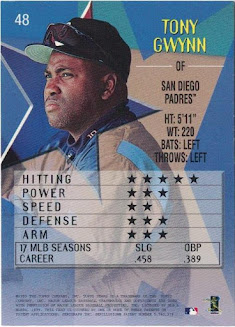 Two stars for speed seems a bit harsh. Tony was 39 when this card came out and no longer a spring chicken. They have also ignored Tony's career batting average figure in favour of the higher numbers for slugging and on-base percentage. Slugging percentage is calculated by giving hits different values - home runs are four times as valuable as singles, because, obviously they always deliver at least one run. Anything above .450 for slugging is a decent return. Tony achieved his percentage the hard way, with a lot of hits, as he was never a prolific scorer of home runs.

That's the Topps Edition of the Monday Mixer. I hope you enjoyed it. See you tomorrow for a Triple Tuesday!

Posted by Jongudmund at 8:17 AM

Email ThisBlogThis!Share to TwitterShare to FacebookShare to Pinterest
Labels: 1999, 2002, 2005, Topps