Monday Mixer across the decades

Three random cards from three different decades today. To start us off, here's a card from the very beginning of the 1990s...

It's an All-Star card! 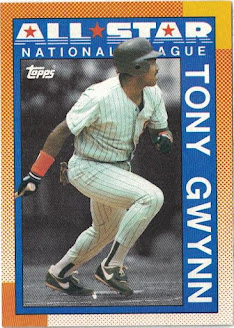 Topps were really a budget operation in 1990. In previous years the All Star cards featured posed portraits (which was just as well in 1987 as Tony's base card didn't show his face or the name on his shirt, so the All-Star card gave you a chance to see what he looked like). But in 1990 they used a slightly different action shot for the All-Star card. It might even have been a photo from the same game (decide for yourself by looking at his base card, here).
The back manages to use three different typefaces. 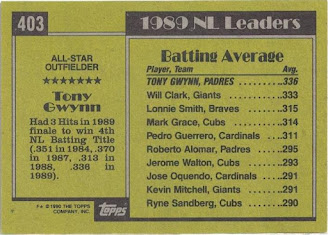 At least the factoid is relevant and related to his batting average, even if it doesn't mention the All-Star Game.

Allan from the UK Baseball Cards group on Facebook sent me this card. 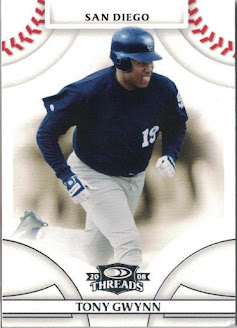 This card was issued just before Panini acquired DonRuss and their associated brands. DonRuss were already practicing producing unlicensed cards, although they didn't make much of an effort at erasing the SD on Tony's helmet or left sleeve. For a logoless card, it's a decent effort. The baseball stitching along the top makes it stand out. 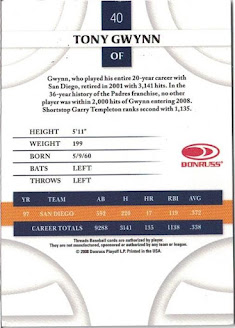 The back notes that seven years after he retired there still wasn't a Padres player within 2000 hits of Tony's total. 12 years after this card was printed, Garry Templeton is still second on the all-time Padres hits chart. There are a few players who have played this century who have made it into the top ten - Chase Headley (#5). Brian Giles (#6), Adrian Gonzalez (#7), and Phil Nevin (#8) but none of them made over 900 hits while they were Padres. Tony's record is secure, unless the Padres lock down Fernando Tatis Jr and he ends up playing 20 seasons for them. 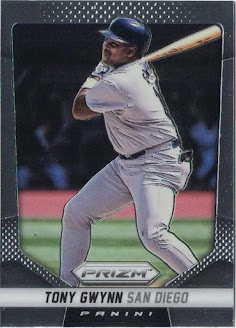 Panini Prizm base cards exist just so Panini can pad their packs with filler in-between all the parallel colour variations. I don't know of anyone who collects these sets. 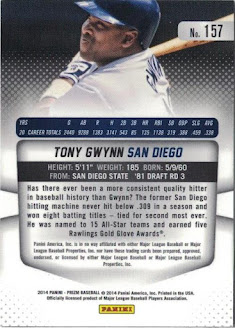 Is there anything positive that can be said about these cards. Well, yes. For a shiny card, this scans reasonably well on my basic scanner. There are no mistakes (that I can see) on the cardback and that's quite a good, succinct write up. It's an action shot and you can see Tony's face. Panini are always going to be stuck with what they can do without a licence but at least they get the basics right on this card.

Posted by Jongudmund at 8:29 AM