Yesterday marked the 21st anniversary of Tony Gwynn's 3000th hit. Yesterday. Here are a couple of cards that got the details wrong.
Card Number 248: Fleer Impact, 2000; #MF35
Remember Fleer Impact? It was a one season card range with low production values. The MF numbering refers to players they regarded as Mighty Fine in '99. Rhyming insert sets are fine by me, and I'm relieved that's what they were referring to when they used the initials MF.
In fairness, it's a good looking card. 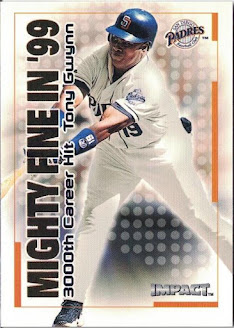 But see if you can see the problem on the back. (Hint: they got distracted by nines!) 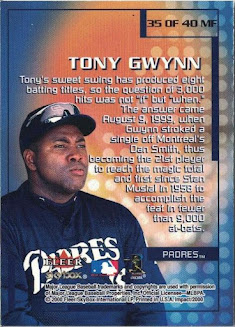 Yes, they got the date wrong. Tony made his 3000th hit on the 6th August, not the 9th August.
It's a real shame, because this is otherwise a mighty fine card.
Sidebar: Back in the 80s I used to go with my Dad to watch Shrewsbury Town FC play in the old Second Division of the Football League. (That's the highest level Shrewsbury have ever played.) In the 1985-6 season there was an advertising hoarding opposite where we sat for a road safety campaign that said 'Stay Alive in '85!' In the January, they updated the sign to read, 'Stay Alive in '86!' Even at the age of 10 that jarred with me. I have every reason to suspect that if Fleer Impact had lasted more than one season we would have seen cards saying 'Mighty Fine in '00' the next year!
Fleer were only three days out and their card only had the one mistake. Unlike the next card in this post...
Card Number 249: Topps Update Chrome, 2016; #3000C-12
This is a really lovely card to look at. It's super-shiny and it scans incredibly well! 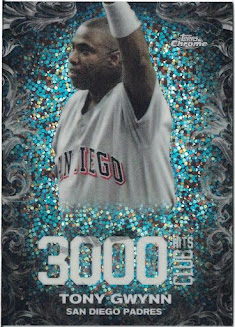 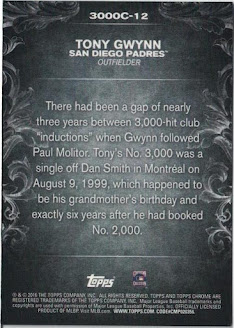 Topps must have been fact-checking their dates against their collection of Fleer Impact insert cards because they got the date wrong too! They also moved his poor mom back a generation and called her his grandma. That's two strikes, Topps!
Neither of these factual errors were recorded on the Trading Card Database, but they have been noted on there now!
Total: 249/394
Posted by Jongudmund at 10:44 AM