A pair of Diamonds

Black Diamond was a premium card set released by Upper Deck for a few seasons at the tail end of the 90s and beginning of the new millennium. All the cards are shiny, making them difficult to scan.
Card Number 242: Upper Deck Black Diamond, 1999; #69 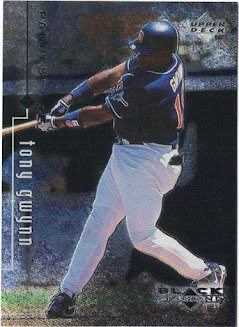 For a premium product, this looks alright. It's not the most exciting card.
The back is incredibly dull. 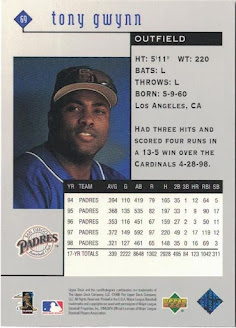 The factoid is reasonably impressive. It's not an everyday occurrence to score four runs in a game, particularly when you've only scored three hits! However, this card was released the season after Tony played in the World Series, so it's an unusual choice of factoid. Mind you, just about every other card of Tony released in 1999 mentioned him scoring a home run in Yankee Stadium during the World Series, so this is a refreshing change.
Card Number 243: Upper Deck Black Diamond, 2000; #71
This honestly is an Upper Deck card from 20 years ago, rather than a Panini Prizm card from 3 years ago. 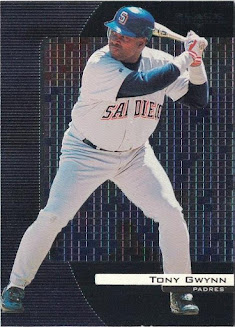 Again, it's shiny. Don't expect it to be interesting to look at as well! 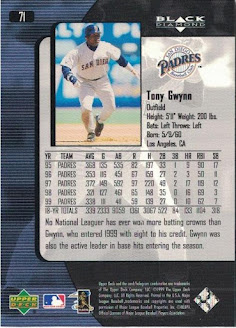 That is an odd photo on the back. At first glance it looks like Tony is just standing legs akimbo or walking like a cowboy for some reason. Then it becomes apparent that he is running.
Again the factoid editor missed the obvious thing to highlight, given Tony had connected for his 3000th hit during the 1999 season. Maybe they just thought every other card set would be mentioning that and they wanted to be different.
Total: 243/394
Posted by Jongudmund at 10:05 AM