The trend for releasing cards that look like older cards really kicked off around the turn of the Millennium. Despite being the card company that released the original cards that inspired the retro-looking cards, Topps were a bit slow to the party. Other card companies were quite happy to borrow their vintage looks though.
Card Number 287: Upper Deck Vintage, 2001; #287
Totally unintentional alignment of my numbering system with the set number!
This is sort of a rip-off of the Topps 1963 design. 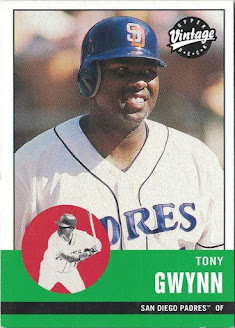 Tony is smiling at someone. It's a slightly strange, forced smile. 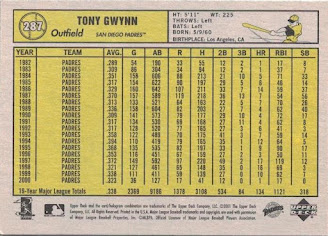 The back is one big stats box. There's a nod to the cartoons that were on the backs of Topps cards in 1963 with the little drawing of a dude swinging a bat. Tony's weight is listed at 225 pounds, here, which is the upper limit of his published weight on a cardback that I've seen.
Card Number 288: Upper Deck Vintage, 2001; #297
Tony's on this card (among all the other disembodied heads) so I'm counting it. 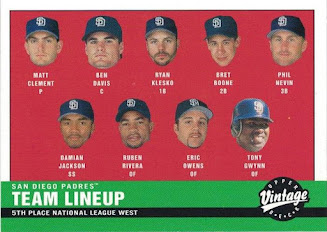 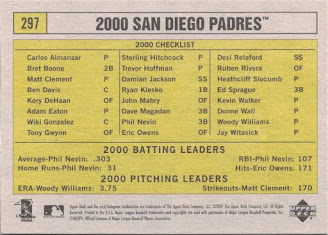 There are a couple of notable names on the back. Adam Eaton listed here is a different Adam Eaton to the World Series winner currently playing for the Washington Nationals. They've listed Phil Nevin as the batting average leader, although Tony's average was .323 in 2000 - however, Tony only played in 36 games (with 140 plate appearances).
Card Number 289: Upper Deck Vintage, 2002; #234
This set was a homage to the Topps set from 1971.
Tony had retired at the end of the 2001 season, but still got to be on the Padres team checklist. 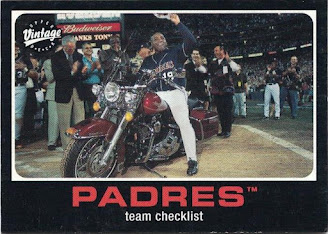 It's a great photo and it would have been a shame not to use it. This was the motorcycle presented to Tony during the ceremony to mark his final game for the Padres. 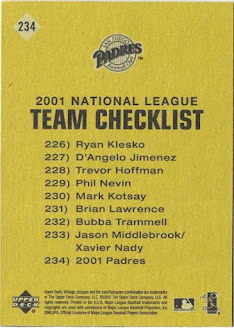 As checklists go, this is an improvement on the previous year's, because it has the card numbers for the different players. Comparing checklists from two consecutive years really shows how the team roster changed from one year to the next. Only three Padres players had Vintage baseball cards in 2000 and 2001.
Total: 289/394
Posted by Jongudmund at 8:57 AM