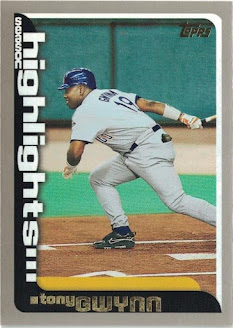 This card gives some great background information about the lead up to hit number 3000. The night before the Padres played the Cardinals and Mark McGwire recorded his 500th home run. There was every possibility that Tony would hit his own milestone in the same game. Except, the pitching staff in St Louis hadn't read the script... 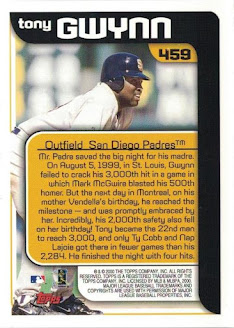 The card also notes that weirdly Tony achieved both the 2000 hit milestone and the 3000 hit milestone on his mother's birthday, six years apart. That's pretty cool scheduling. (Here's a write up from a couple of years ago about how reaching the milestone in Montreal was a bit of a let down for Tony.)
Card Number 245: Skybox Dominion, 2000; #19 (Season Highlights)
This is an orange card. 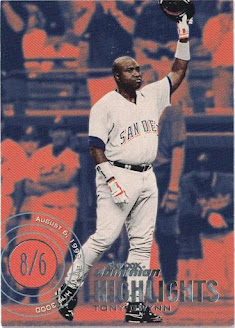 This card has a unique look with the orange wash background and Tony picked out in full colour. I hope the photo is of him acknowledging the crowd on the occasion of his 3000th hit. But if so, that's one casual guy with his arms crossed in the dug-out in the background. 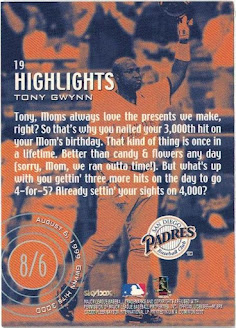 The write up on the cardback goes with the 'Mom's birthday' angle, in that bizarre chatty style that Skybox seemed to use on some of their cards. (The Spring Training one is like this.) However, I can forgive them that because this is card number 19 in the set!
Card Number 246: Pacific Private Stock, 2000; #124
Hot damn! Pacific did some nice cards in their time. 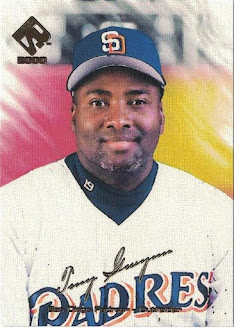 I honestly couldn't like this card more than I do!
The back is a nice faux newspaper story. 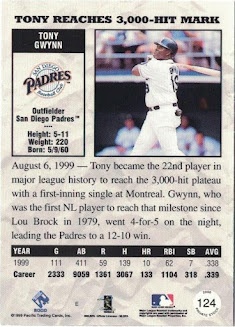 In the details on the back it's revealed that Tony was the 22nd player to reach 3,000 hits, and the first National League player since 1979, two decades prior!
Card Number 247: Upper Deck Hitter's Club, 2000; #67
Hitter's Club was a small set of 90 cards featuring players known for their batting skills. Within the set, Tony had a regular card and was part of the 22-card "Why3K?" series featuring all the players who had achieved 3000 hits. 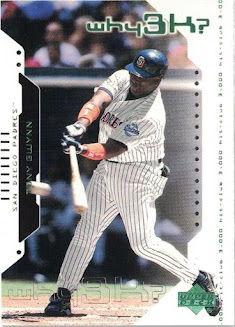 The "Why3K?" name for the subset was a riff on Y2K, the commonly applied moniker for the year 2000. Often linked with the Millennium Bug fears and the general changeover of the century. I recall the countdown to Y2K was a mixture of wanting to make the most of the occasion and hoping planes didn't fall out of the sky and my bank account wasn't deleted. (Not that I had any money back then!) It's funny what memories get triggered by baseball cards.
The cardback features a solid portrait photo of Tony and mentions his .394 average in 1994 as well. 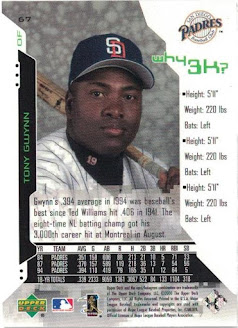 The repetition of Tony's vital statistics three times down the right hand side of the card is decidedly odd. Upper Deck did this on all the "Why3K?" cards. They must have really wanted everyone to know that Tony was 5'11".
Total: 247/394
Posted by Jongudmund at 10:01 AM