Today's post marks the 300th card featured on this blog. It seemed cool to mark it with a card from a series that was all about .300.

In their 400-card set in 1996, Pinnacle introduced their 300 series, starting at card #300 and then interspersed with regular base cards. The card numbering aligns with the batting average of the player on the card. So, for example Edgar Martinez was card #313, Mike Piazza was #322 and so on. Tony's was the highest numbered card in the "300 series" because his .336 brought him the batting champion title. 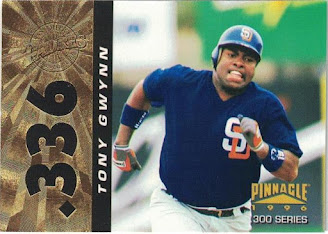 In terms of photography I feel it was an odd choice not to have a batting photo on the front of a card all about batting average. They made up for it with the photo on the back. 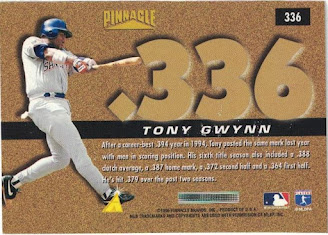 Pinnacle threw in a whole lot more stats of Tony's batting average under certain conditions on the back for good measure.

The alignment of card numbers in the set with the batting averages that players achieved gives me a slight geeky thrill. If I was awarding cards points, this would definitely be a multiple point winning idea. I haven't seen it replicated anywhere else, even though it's such a good idea.

This being Pinnacle, of course, you get the opportunity to enjoy it more than once!

The foil parallels really glimmer in hand. You'll have to take my word for it. 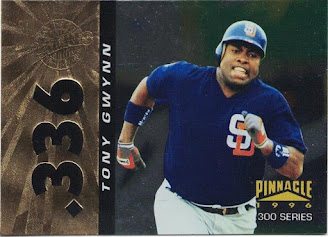 The cardback is exactly the same as the regular base version. 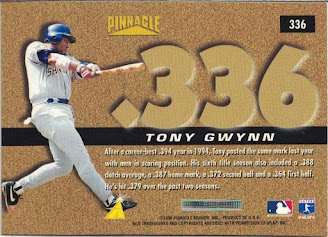 That target of 394 cards is looking very attainable now!