One card only: Gone fishin'

Baseball card companies like to be a bit quirky sometimes and show a player in a different environment, or playing a different sport.
Card Number 232: Upper Deck, 1997; #492 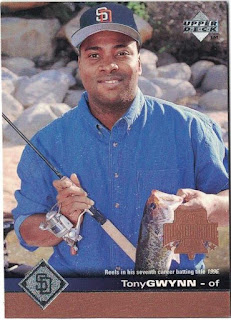 Did you ever expect to see Gwynn and Trout on the same card?
In He Left His Heart in San Diego, Jerald Clark relates a funny story about going fishing with Tony and how he had to tie Tony's lures on for him because otherwise they flew off when he cast. It's one of the few stories in the book that is actually about something Tony couldn't do very well.
The brown splodge on the card is a foil stamp for the 1996 All Star Game in Philadelphia. Upper Deck applied it to all the All Star players in the set. Although Tony was initially named as a starter for the National League, he didn't actually play. His fellow Padre, Ken Caminiti, scored a home run though, as the National League won 6-0. This game was also Ozzie Smith's final All Star game before retiring. To date it is the most recent All Star game to be played on artificial turf.
The cardback mentions Tony going fishing. 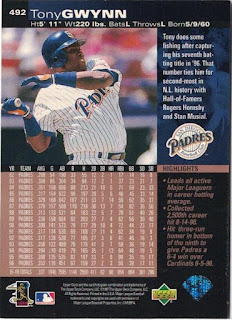 The three factoids down the side are more informative than the large stats box. It notes that Tony collected his 2,500th hit on 14 August in the preceding season. There's also a reference to a relatively rare event - a Tony Gwynn home run!
Total: 232/394
Posted by Jongudmund at 9:39 AM