One card only - mini retro relic

Continuing on from the retro theme of yesterday, here is another example of a card company producing a retro card that borrows its look from another company. This time it's Topps who replicated the classic T206 design that was printed by British American Tobacco from 1909-1911 and distributed in various products of the company.

The original T206 cards are highly collectible. One thing they didn't have was relics.

It's a 'mini' card that's more the size of the original tobacco cards, and comes in a frame. 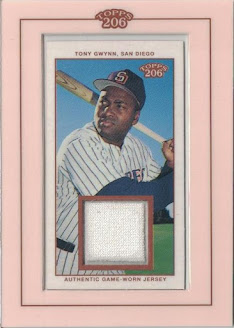 Where this differs from most other relic cards is the tiny piece of fabric can be seen from the back of the card as well. 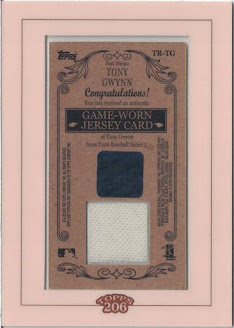 There's a holograph on the back as well as a mark of authenticity. Unlike the original T206 cards, though, there wouldn't be much money to be made in forging this one. Trading Card Database currently values it at $1.67.

There are three different versions of this card, and as this is from 'series 3' it might explain why the copyright notice is for 2003 when the set is listed as 2002 on Trading Card Database. I'm listing it here as a 2003 card because that's what it says on the card and while I'm used to cards being copyrighted in the previous year to the set being released, it feels silly to list this as a 2002 card when it's copyrighted a year after that.