On 4th August 1993, Tony Gwynn recorded six hits in a single game against the San Francisco Giants, scoring two runs as the Padres won 11-10 after 12 innings. (Here's the box score!)
This was the only time in his career that Tony recorded six hits in one game. To commemorate the fact here are six cards that could be classed as 'hits' from the Fleer Ultra set in 1992. Fleer produced ten Tony Gwynn Commemorative Cards that season, which were inserted in random packs. There were also autographed versions of each card - Trading Card Database says there were 2,000 autographed ones, so I assume they were spread out with 200 of each card.
The ten cards roughly cover Tony's first ten seasons in Major League Baseball, during which time he had won four batting titles, five gold gloves and been an All Star seven times. I don't have all the cards in the set. But I have six, which links in with celebrating Tony's six hit game today.
Card Number 236: Fleer Ultra Tony Gwynn Commemorative Series, 1992; #1 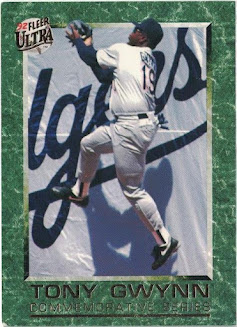 This is the first of the set that I acquired. (It arrived in a joblot off eBay and one of the corners is dinged.) The green marble effect border is a little bit overpowering when you look at several of the cards together. (Although recent commenter Adam K will be happy!)
I presume this photo was taken at Dodger Stadium as Tony is jumping in front of a huge 'Dodgers' sign. As a kid, Tony used to go to Dodger Stadium with his Dad. I wonder how he felt playing there. 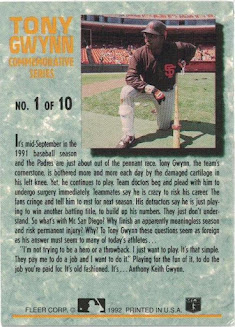 For a commemorative series, the cardback opens with a very odd vignette about Tony Gwynn's knee injury. Even though this is only halfway through his career, that knee problem was beginning to affect his game. The mention there of his detractors is a rare glimpse into a side of the Tony Gwynn story that doesn't get talked about much. At this point in his career, he didn't get on with all his team-mates and he was accused by some of them of putting his own quest for personal glory ahead of the team's success.
Card Number 237: Fleer Ultra Tony Gwynn Commemorative Series, 1992; #4 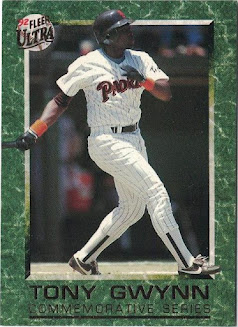 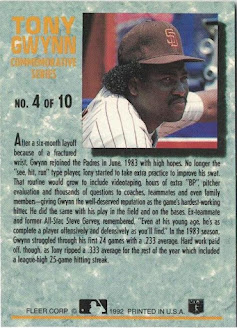 This is another card where the write-up starts with a discussion of an injury! This time it was the wrist injury that affected him at the end of his rookie season. Even back in 1983, Tony had started to use video to analyse pitches and his own batting style. The reliance on video became something he was renowned for as a pioneer in the deployment of technology to improve. Today it would be unthinkable for a top athlete not to be reviewing videos of opponents to assess their strengths and weaknesses.
It was certainly paying off for Tony in 1983 as he went on a 25 game hitting streak at one point.
Card Number 238: Fleer Ultra Tony Gwynn Commemorative Series, 1992; #5
Tony seems caught in two minds here whether to run or not. 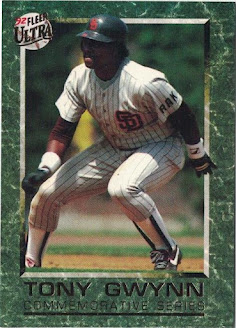 There's a posed portrait photo the back, and a comparison to Michael Jordan. 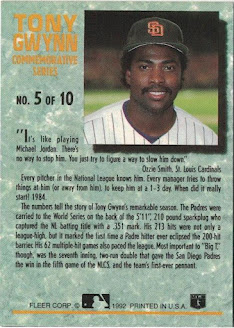 The cardback is all about Tony's 1984 season when the Padres won their first ever championship and played in their first World Series. I have thought about keeping a list of all the adjectives and descriptions that Tony was given on the backs of baseball cards. "Sparkplug" is a new one for the list!
Card Number 239: Fleer Ultra Tony Gwynn Commemorative Series, 1992; #8 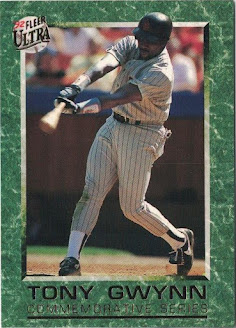 The perspective on this photo makes the end of the swinging bat look like a cartoon rubber bat.
The photo on the back looks like Tony has just clocked someone is taking photos of him. 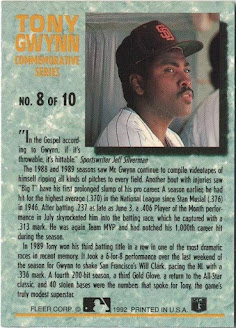 That's a great quote from Jeff Silverman on the cardback. Tony didn't write a gospel, but he did write his own hitting manual, in the style of his hero Ted Williams. The blurb also covers Tony's .370 season in 1987, and his follow-up batting title in 1988 - the season he also recorded his 1000th hit. He took between five and six seasons per 1000 hits during his career, reaching each 1000 hit milestone in 1988, 1993 and 1999.
Card Number 240: Fleer Ultra Tony Gwynn Commemorative Series, 1992; #S1
In addition to the 10 commemorative cards inserted into random packs, people could also send off empty wrappers to claim two bonus 'Special' cards. Although I don't have the complete set of these cards, I do have the two bonus mailaway ones. 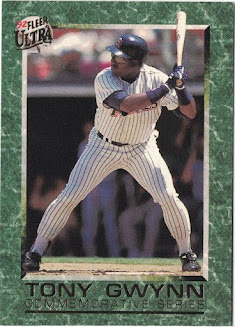 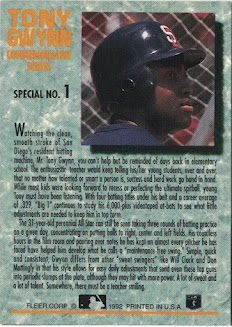 Tony is called "Big T" on the cardback. That's another addition to the way Tony got referred to on the back of a baseball card.
Card Number 241: Fleer Ultra Tony Gwynn Commemorative Series, 1992; #S2 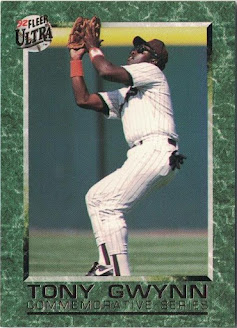 Tony is ready to make the catch! It amuses me how he has stuffed his batting gloves into his back pocket there. 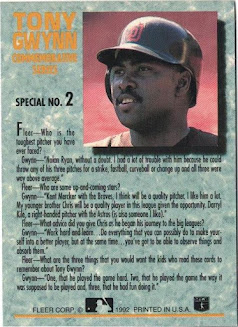 The back is a mini interview. I've said before how I like those. From this we learn that Nolan Ryan is the toughest pitcher he has ever faced - although he recorded his 1000th career hit off Ryan! He name checks his brother, Chris, as an up-and-coming star. There's a poignancy in the final question - how would you want to be remembered? I think those are all things he is remembered for.
So those are the six hits to commemorate six hits! Tony also jointly holds the record for the most 5-hit games in a single season. The record is four games in a season and the only other player from the modern era to achieve that is Ichiro. Ty Cobb, Stan Musial and Willie Keeler all managed it too.
Total: 241/394
Posted by Jongudmund at 10:59 AM