Flair was a premium range that Fleer released throughout most of the Nineties. I always associate flair with Jennifer Aniston's put-upon waitress character in Office Space, a film which apparently caused a change in the restaurant industry because of the way it mocked "flair".

However, no intention of mockery here, just some Flair cards for your enjoyment. 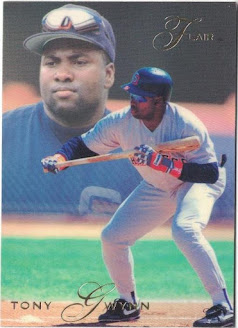 The way they have montaged this photo makes it look like Tony is a Jedi ghost watching offering guidance to the batter at the plate. Meanwhile, at the plate, Tony looks like he is preparing to bunt. 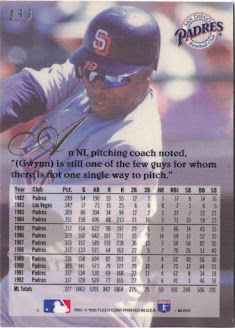 On the back we have a quote from "An NL pitching coach". Imagine saying something so pithy and profound that a baseball card company decide to put your one line summary onto the back of a baseball card. And then they decide not to add your name. Maybe the coach only gave a quote on the strict condition of having his anonymity preserved!

And although there wasn't a single way to pitch to catch Tony out, one team did almost try something a bit different. Apparently, Tony did not like knowing what pitch was coming and one team considered telling him as a way of putting him off. 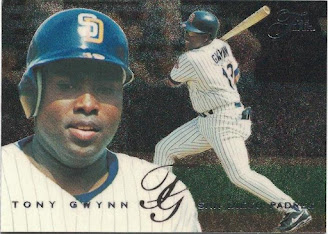 This shiny card has a glitter coating. The big picture of Tony is less ghostly. 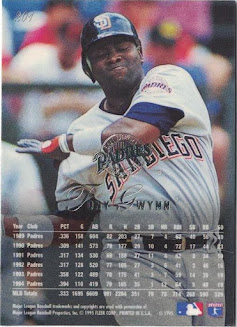 That's not a flattering photo on the back. The odd positioning of the team logo right in the centre of the card doesn't improve the photo either.

And the winner for weirdest card numbering system goes to.... 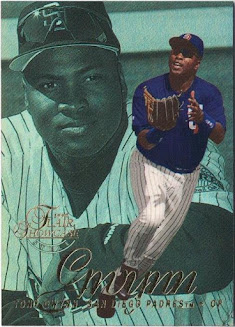 This time the juxtaposition of close up photo and inset full length photo really works well. Then they decide to give the main photo a green tint.
I don't have the foggiest idea what's going on with the card numbers. They've also decided to cover most of the photo on the back up with a stats box. 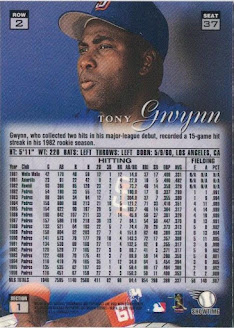 Reading this back, I know I said I wasn't going to mock the Flair, but the cards have been consistently offbeat throughout so it was almost unavoidable.