I recently commented on Jeff's blog, Wax Pack Wonders, because he was running a giveaway. I then emailed him to say I understood if he didn't want to send cards overseas. He said he didn't mind, and then a couple of days ago a white envelope with an American stamp on came through my letterbox.

There were three Tony Gwynn cards in the envelope, along with cards of Greg Vaughn and Manny Machado, and a note from Jeff.

All three cards were brilliant and they will all get profiled on the blog eventually. But today as a thank you to Jeff, I'm going to blog about one of them.

Pacific Omega Hit Machine 3000 sounds a bit like an android from a dorky science fiction series, but it was actually a 21 card insert series honouring Tony Gwynn achieving the 3,000 hit mark in 1999. Pacific Omega was the set released by Pacific towards the end of the year, a bit like Topps Update and sets like that.

The inserts were in hobby boxes of the product and all the cards were numbered to 3,000. This was the second card in the set and features an extreme close up of Tony's face. 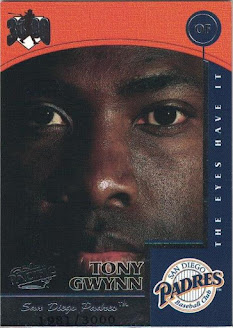 You can just about make out the serial numbering at the bottom of the card there. This is card 1981/3000. I'm not a big fan of numerology, but some numbers are more meaningful than others. 1981 was the year Tony was drafted in the third round by the Padres.
There's some more numbers on the back. 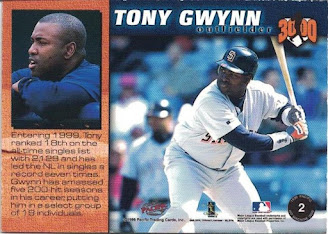 Another one of those numbers is coincidentally meaningful. Tony was one of 19 players who had scored 200 hits in five seasons. 19 is of course the magic number where Tony is concerned.

This looks like it would be a lovely set to collect. Pacific remains one of my favourite card producers and they seemed to really put lots of care into their sets. It might not be easy tracking any more of these down, so I am hugely grateful to Jeff for sending it to me.

Posted by Jongudmund at 9:35 AM