Taking a look at Bazooka!

Bazooka Gum was a Topps brand of gum launched after the second world war. As you'd expect there were trading cards linked to the gum. There are actually three eras of Bazooka cards - the 1960s, the mid-90s, and a short run from 2003-2006. More recently Bazooka has been an insert series in Topps Heritage and also been variant cardback for Allen & Ginter mini cards.
These cards featuring Tony are from the second era of Bazooka cards, the 1990s.
Card Number 229: Topps Bazooka, 1995; #30 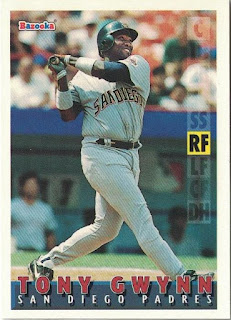 Although Bazooka was a cheaper card range aimed at kids, this is a really nice card.
The back is some kind of game called Play Ball. It looks fun. 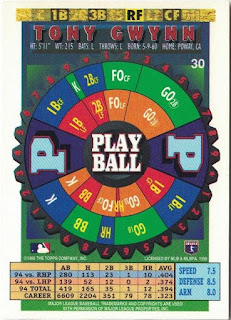 That's a fairly in-depth statistical background for a kids' range. It reveals that in Tony's most memorable batting season, he did better against right-handed pitchers than left-handed pitchers. I hadn't seen that stat anywhere else, which kind of shows why it's important to collect all the cards!
It doesn't say what the ratings in the little blue box are based on. Why was Tony's throwing rated an 8? (And out of what?) I suspect these are fairly meaningless numbers that had something to do with the game.
I've read a few theories about why Topps Kids undersold in 1992, and one of them was that it had no parallels. Younger collectors may have felt they weren't getting as good a product as adults were getting. Topps made up for that in Bazooka with a few different parallel versions of their cards.
Card Number 230: Topps Bazooka Red Hot Parallel, 1995; #RH-6 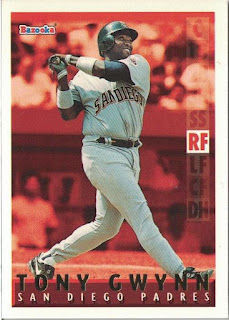 In addition to the slightly apocalyptic red background, this parallel had Tony's name in gold foil on the front.
The cardback has more red in the colour scheme and the wheel contains different parameters. Tony is less likely to strike out with this card! (If that's how the game works!) 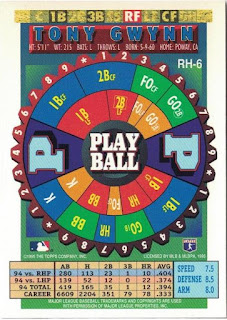 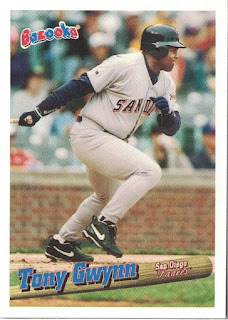 Having the bat with Tony's name on makes this card look a bit more like a card for kids.
There's another kind of game on the back as well. But the main attraction is a cartoon of Bazooka Joe who is sporting an eyepatch for some reason. 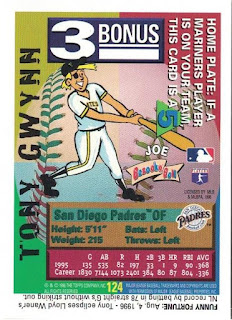 Bazooka Joe was character who appeared in little comic panels on pieces of Bazooka gum. The other things to feature on gum wrappers were 'fortunes'. There's also one on this card - at the bottom, upside down - which is a baseball prediction about Tony Gwynn. According to this on 4 August 1996 Tony would appear in his 79th game in a row without striking out, thus acquiring a new National League record.
I don't believe in spoilers so I'll leave it up to anyone reading this to find out if it happened.
Total: 231/394
Posted by Jongudmund at 9:08 AM