Soon after I started this blog I posted about a Pacific card that listed Tony as Jardinero! Literally this means a gardener in Spanish; in baseball terms it's an outfielder. Voltigeur is the French word used for outfielder, although its literal meaning is an acrobat or tumbler. (Fun fact: a voltiguer was also a member of a lightly armed skirmishing unit in the French army during the Napoleonic Wars. In Canada is also had a semi-military application meaning a ranger.)
Anyway, as you can probably guess, this is a prelude to my post today featuring cards that call Tony a voltigeur. That means, of course, Canadian cards, and if there is one card manufacturer that springs to mind when Canadian baseball cards are mentioned, it is O-Pee-Chee.
Like a lot of card producers, O-Pee-Chee started out as a candy manufacturer. Candy and cards were a natural fit and soon the cards were just as important - perhaps more important - than the candy. For most of the 80s, O-Pee-Chee reprinted Topps cards, with the O-Pee-Chee logo and sometimes other minor variations. But in the  early 90s, they also produced a premium range called, fittingly, Premier. They then diverged from Topps and released their own flagship sets for a couple of seasons.
In 1996 O-Pee-Chee was bought by Nestle, and O-Pee-Chee became a card publishing brand with various licences that it could sell on to other card companies. After the Nestle takeover, Topps printed O-Pee-Chee cards under licence, but since 2007 O-Pee-Chee cards have been produced by Upper Deck.
Card Number 233: O-Pee-Chee Premier, 1991; #59 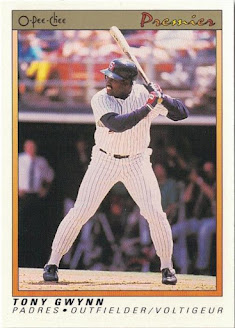 The Premier range was designed to compete directly with Upper Deck. It was printed on a decent card stock and was full colour front and back, unlike the Topps flagship that O-Pee-Chee reprinted.
There is a tokenistic amount of French on the back 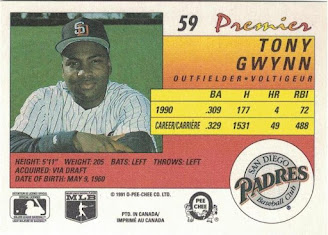 Living in a country where it is a legal requirement to ensure published materials are fully bilingual, I find bilingual cards particularly interesting. This card would most definitely not meet the requirements of the legislation regarding linguistic representation to which I have to adhere in my day job.
It's a very cute little company logo on the back though.
Card Number 234: O-Pee-Chee Premier, 1992; #106
One thing that O-Pee-Chee inherited from Topps - they really didn't believe it was important to show much of the player's face. (Also, is Tony looking to bunt there?) 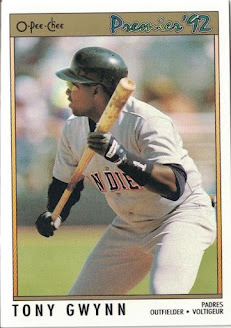 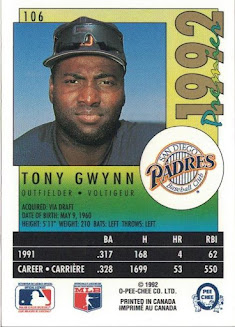 In fairness, there is limited information on the back of the card, but again the commitment to two languages is the bare minimum.
Card Number 235: O-Pee-Chee, 1994; #100
This was the regular card set that O=Pee-Chee produced. 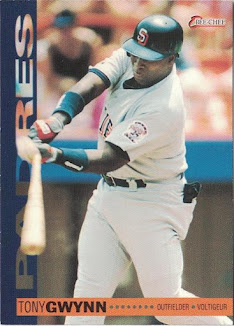 For a flagship product, this is high spec. Full bleed on good card stock and a ball-on-bat photo!
Tony is jogging on the back. Sadly the cute logo with the little kids has gone. 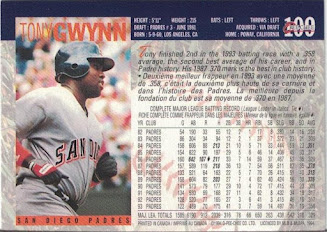 But the cardback has some blurb in both English and French. The columns on the stats box are single-language but this is a much better effort at providing bilingual information.
This was actually the last home-grown baseball card set that O-Pee-Chee produced as the company began to struggle, and two years later it was acquired by the giant Nestle corporation for whom cards were not a priority.
Total: 235/394
Posted by Jongudmund at 8:41 AM