Sometimes Tony shares a card with another player. Usually there's an obvious reason, like they are a fellow chart-topper, or related to him, or team-mates.

And sometimes there is no discernible reason at all. 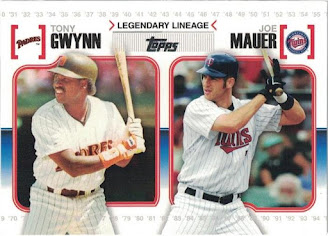 This is an insert card from Topps along the theme of 'legendary lineage'. The other player is Joe Mauer, who played his entire career for the Minnesota Twins. 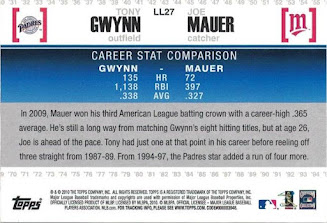 About the only connection on the back is that Joe Mauer had won some batting titles. He never added to the three titles he had accumulated by the time this card was published. (He remains the only catcher to win a batting title in the American League.)

It is possible to find some similarities between the two players. Both Tony and Joe were one-club men for their entire careers. Both have had their shirt numbers retired by their teams. They both have a career batting average over .300. They also both played basketball; both as point guards, although Mauer didn't play at College level. (He did go to college on a Football scholarship, though, so there is a similarity with Tony there, in that both went to college on sports scholarships for sports that weren't baseball!)

But there is no actual connection between the two. Gwynn didn't coach Mauer or play alongside him at any point, which would be reasonable to expect for a card denoting "legendary lineage". There is no lineage. This is just Topps putting two random players on a card.

However, there is one reason I'm glad to own this odd card - it's the only Topps card featuring Tony in my collection that was printed in 2010!

Posted by Jongudmund at 7:48 AM

Email ThisBlogThis!Share to TwitterShare to FacebookShare to Pinterest
Labels: 2010, other players, Sharing the Spotlight, Topps